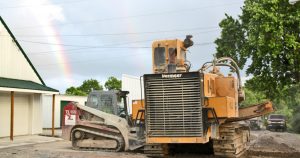 The end of the rainbow is in sight for Burgin residents after a year and a half of construction. Officials are trying to find a way to equitably divide revenues the new sewer system will generate.

The Burgin City Council and the Mercer County Sanitation District are still negotiating how to divide the revenues for the city’s sanitary sewer project, which is rapidly approaching completion.

Last week, the District offered Burgin a $7,500 start up fee and four-percent of revenues to handle sewer billing. The Sanitation District’s offer is a five-year contract, with a five-year option. Either side could opt out of the agreement with a 60-day notice.

In the end, the council agreed to make a counter offer. They would take a $7,500 lump payment, five-percent of the sewer billing. The deal is contingent on the Sanitation District reducing the monthly minimum to $25 for 1,000 gallons.

Mike Sanford, executive director of the Mercer County Sanitation District, said Burgin’s offer has gone before the District’s board, but there hasn’t been an answer.

“We haven’t accepted it but we haven’t rejected it,” Sanford said.

The District has established a deadline of May 31. After that, they will handle billing themselves, leaving Burgin with no revenue from the sewer system except reconnection fees. Assistant City Clerk Mary Jo Lawson said Burgin makes $50 for each reconnection.