The Mercer County Jailer says his poorly equipped transport van is to blame for the escape of a prisoner on Friday, May 12.

Chamberlain was transporting  Evan Paul Goodlett, 25, of Harrodsburg, to Boyle County Detention Center when Goodlett kicked out a window and ran across U.S.-127.

“I just turned my signal on to turn left to go into Boyle County and I heard ‘Boom’ from the middle compartment of the van. I didn’t even have the van stopped, “ Chamberlain said. “I looked back and he was out the window.”

Goodlett managed to kick out the window even though he only stands 5-foot, 8-inches tall and weighs 155-pounds, according to the jail website. He was also restrained, wearing a leather belt with handcuffs that forced his hands up by his armpits.

“He kicked the window out, he went out the window feet first and ran across 127, four lanes of traffic, like a duck,” Chamberlain said. 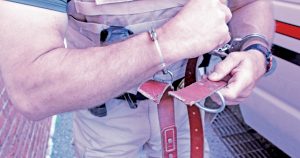