“Our goal is to break ground in July,” said Wes Carter, regional director of development at Campbellsville University.

Carter said Campbellsville has already raised $100,000 towards the $500,000 in estimated building costs. He said they’d like to have half the money raised before beginning construction on the annex.

It’s an ambitious goal, but Carter said, “We don’t have a choice.”

Enrollment has grown 262-percent since the Harrodsburg campus opened last August. Currently, there are 190 students, including 163 full-time students.

There were 45 students when the Harrodsburg campus opened last year. 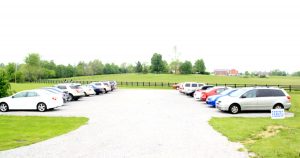 Guests at Campbellsville’s Community Day event on Saturday parked at the future site of the 4,500-square-foot extension planned to begin construction this summer.