Randy Grider: Life On The Farm 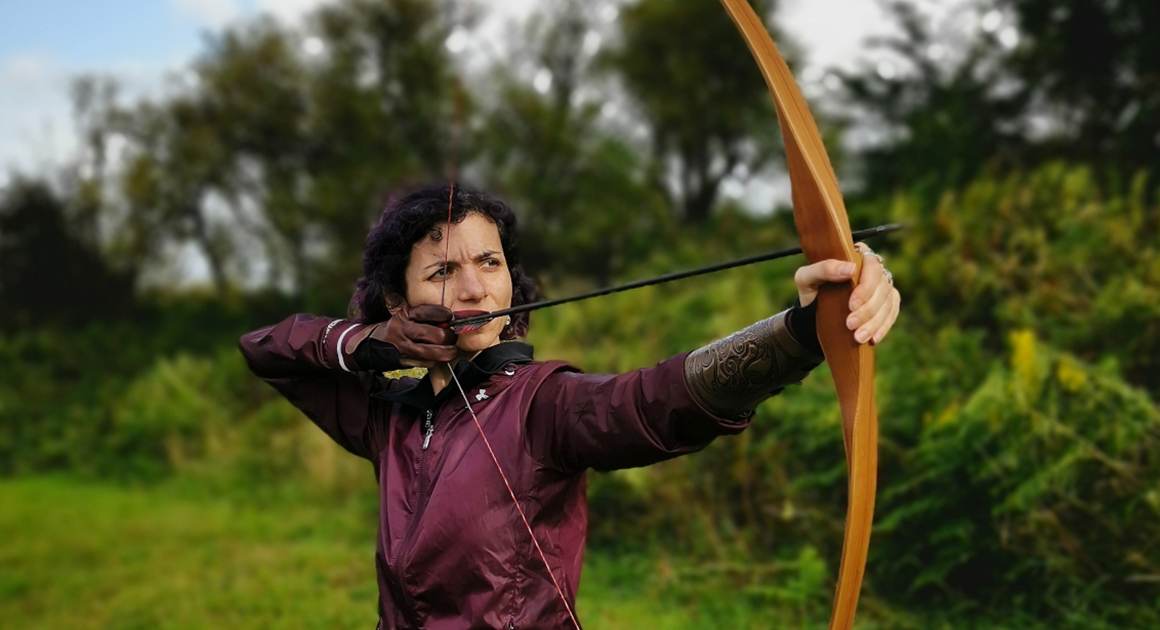 Angela Rivera about to shoot an arrow at a 3D target at the Wye Valley Archery Centre in Wales back in August 2019. Image: Diacritica via Wikimedia Commons.

It’s time again for the annual gathering of traditional archery buffs from around the country! That’s right, every year in early April, 300 or so arrow flinging enthusiast gather at the Mercer County Fish and Game Farm on Whites Lane, right off Perryville Road.

Gate opens on Thursday, March 31, so distant travelers can arrive and set up camps, then be prepared to hit the courses first thing in the morning on Friday, April 1.

The three day event (Friday, April 1, through Sunday, April 1) is hosted by the Kentucky Traditional Bowhunter Association. There are two courses of  20 targets each, lifelike three dimensional wild game targets are strategically placed along a loop trail in the woods, in realistic hunting scenes, some with multiple targets to mimic what one might encounter in the wild.

A stately 6×6 bull elk, bugling for a mate, or maybe a life-sized African male lion on the prowl. No Kentucky pond is complete with out a 10 foot long alligator, and a bull moose, six feet tall at the shoulders is an impressive target!

This author has traveled to many states attending these large archery events, and in my mind, none have the quality of targets this event holds. But that’s not all, also there is a 10 target ‘smoker round,’ where every attendant is allowed one arrow to try and thread an arrow through the densest nastiest brush shots ever created in an attempt to come out with the high score and win a percentage of the total pot of that course shoot fees for the weekend. Also there is a long shot, a brand new deer target placed at an undisclosed distance, a long range attempt to hit the target, and get a ticket(s) in a jar, to draw for a winner on Sunday, the prize being the target itself!

On the biggest day, Saturday, April 2, there is another competition known as the American Round, which is more of an endurance contest where archers shoot 90 shots, from 60, 50 and 40 yards, into a four foot diameter target, scoring to progressively smaller rings.

Another novelty shot is the ‘running boar’, where a hog target is hung from an inclined cable to be shot at as it “runs” by. There are also shots at flying discs with special ‘flu flu’ arrows provided by the club.

A food vendor is on site all weekend providing breakfast and lunch. Vendors will also be on hand with custom made longbows, recurves and self bows, knives and all types archery and hunting related gear.

Also at the front of the game farm, Salt River Long Rifles, a pre 1850s muzzle loader club will be encamped near the rifle range and holding muzzle loader competitions as well.

For the first time this year we are adding the Central Kentucky Bushcrafters, which entails making use of anything acquired in the woods for survivalist scenarios, from making cordage to friction fire and everything in between as well as some attendees will also be whittling out self backed bows and knapping flint arrowheads!

Really there is more than a body can do in one weekend. Attendees may camp free of charge on site and firewood is also furnished free of charge.

I would encourage anyone attending to visit the big tent first for particulars on all events.

Just attending to browse vendors and watch activities is free. There is a minimal charge for shooting the courses. The money goes to purchase replacement targets.

Kids are welcome. For $5 they can shoot all weekend and possibly win a trophy, with many classes, including NASP approved Genesis bows.

Come find out what the largest Traditional Archery event in the state of Kentucky is like. You won’t be disappointed.