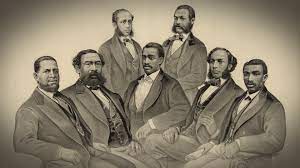 (Editor’s Note: Historic Mercer Stories is a group of historians and writers who are submitting stories in honor of Black History month and will continue to do so through Harrodsburg’s 250th birthday celebration. This week’s story is submitted by retired Mercer County Senior High history teacher Pat Rockas)

As a U.S. history teacher, we covered Reconstruction and it was a always a touching subject. It covered the lives of millions of slaves freed and trying to reconnect to their family who had been sold; who could suddenly vote and could actually have a say in their government.

Their newfound freedom was soon taken away and Kentucky was one of the last states to free slaves. Slave owners argued that since they had not approved the 13th amendment, they did not have to follow it.

An interesting document I used in the classroom was the “Petition from Kentucky Negroes” written in 1871 by a teacher from a colored school, a livery stable keeper, a grocer, a blacksmith and a barber sent to the U.S. House of Representatives and Senate appealing for help from: “organized bands of desperate and lawless men, mainly composed of soldiers of the late Rebel armies who were disciplined and disguised and bound by oath and secret obligations to force terror and violence, subverted all civil society among Colored people, thus utterly rendering insecure the safety of persona and property, overthrowing all those rights with are the primary basis and objects of Government which are expressly guaranteed to by the Constitution of the United States as amended.”