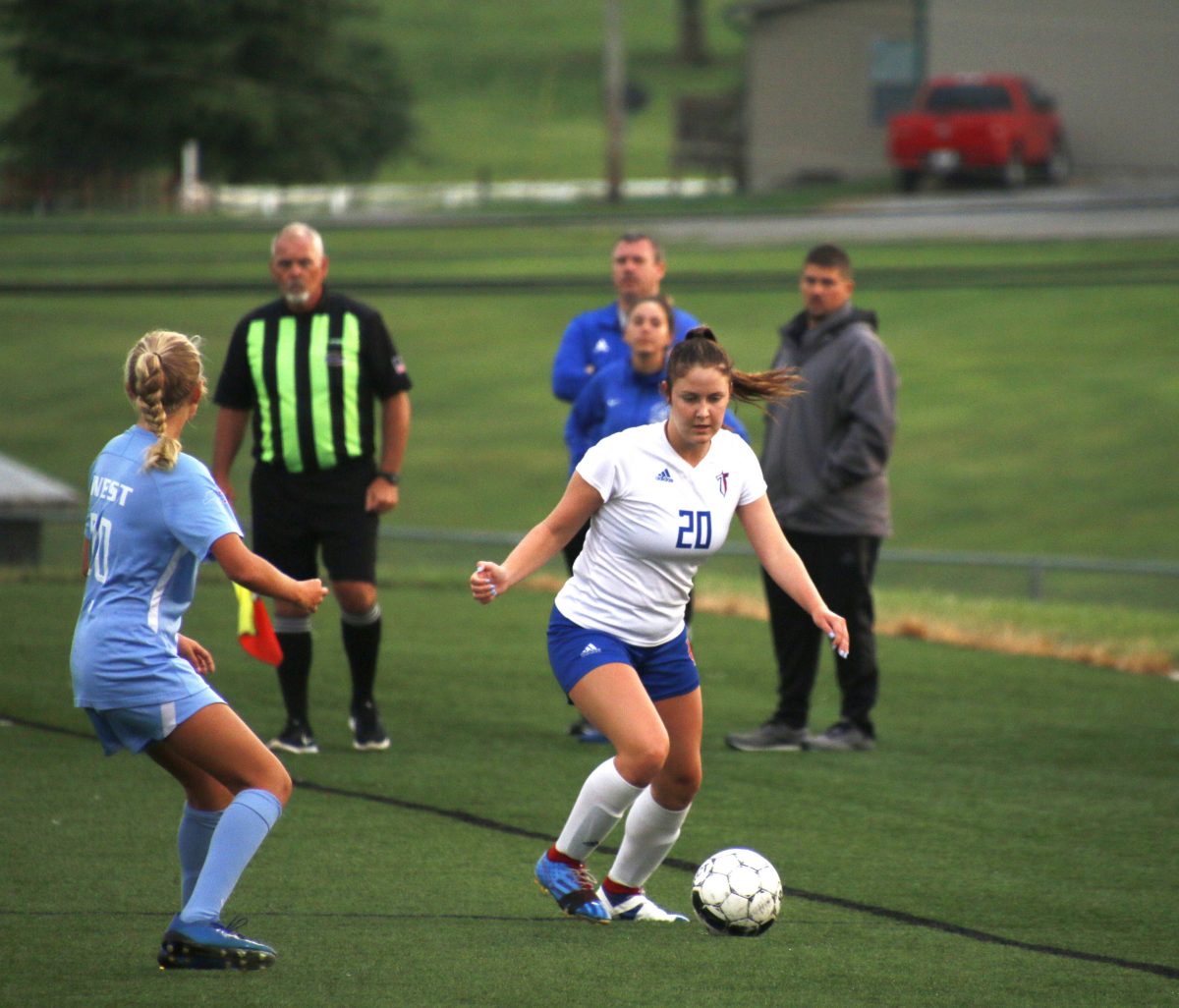 The Harrodsburg Herald/Samuel Warren
Mercer senior forward Marlie Charles worked the ball down the touchline midway through the first half of the Lady Titans’ 7-0 loss to West Jessamine.

The game was originally scheduled to be played at home, but due to excessive rain the game was moved to West Jessamine’s field.

The Lady Colts were pressuring Mercer’s goal from the opening kick off. Lady Titan goalkeeper Riley Sipe was continually forced into awkward positions and one-on-one situations with Jessamine forwards. In the fourth minute, Karlie Galus broke the tension with the first goal, but it was called offside. Moments later, Galus’ shot parried off of Sipe and fell directly to sophomore Ava Crist for an easy tap-in.

The sophomore duo connected again in the seventh minute as Crist’s through ball left Galus wide open in front of goal. Before a minute of game play had passed, Galus was back in front of goal and executed the finish to make the score 3-0.

In the opening 10 minutes of play, Sipe faced no less than nine shots on goal, most of which came from unmarked attackers in one on one situations.

Senior Marlie Charles was the only player to carry the ball forward for the Lady Titans, working the ball down the left flank and crossing into an empty box.

In the 19′ Delia Long of West Jessamine dribbled her way through Mercer’s defense before blasting a shot on frame that was saved by Sipe. Later in the 23,’ Long’s shot from the edge of the box took a deflection before bouncing over the outstretched hands of Sipe and extending the lead.

The Lady Titans were without their starting striker and leading goalscorer in 2020. Emma Kiernan is hurt and will likely miss the Lady Titan’s upcoming games against Madison Southern and Lincoln County as well.

West Jessamine ended the first half with a 7-0 lead, and the second half finished with the same score.

Seven of the 11 players who took the pitch for Mercer had little or no varsity experience.

“I think it did catch our girls off guard a little bit. With a new formation, with a new team. Seven of the 11 girls on the field tonight had zero experience on varsity or minimal experience on varsity, so they’re still getting used to one another in different positions that they haven’t played before. It’s a whole new year and it’s a whole new team, and I think it’s just going to take time to build,” said Joshua Culver, head coach of the Lady Titans.

Culver expressed to the team they can’t come out without energy, and coasting through a game is not how to win, especially against the defending Region 12 champs.