Mercer County Clerk Chris Horn wants the public to know one thing about the recent problems his office—as well as offices across the commonwealth—have recently experienced processing transactions such as vehicle registrations, transfers and vehicle titling: they are just as frustrated as you are.

According to the Kentucky Transportation Cabinet, county clerk offices have been sporadically unable to process vehicle-related transactions due to issues with the state’s system. Last Friday, the Mercer office was unable to do much of anything. On Tuesday morning, Horn’s staff were able to offer services again on a case-by-case basis.

“So far today it seems like it’s working,” Horn said. “It depends on the transaction.”

He said the online portal is working.

“Those transactions are working great for us,” Horn said.

County clerks use the Automated Vehicle Information System (AVIS) to process transactions. The vehicle titling and registration system, which is over 40 years old, has been experiencing intermittent issues from a recent system implementation, according to a state press release, part of an effort to modernize license plate production and to support the cabinet’s long-term goal of transferring all motor vehicle transactions to the new KAVIS system. No driver information was impacted, the state said. 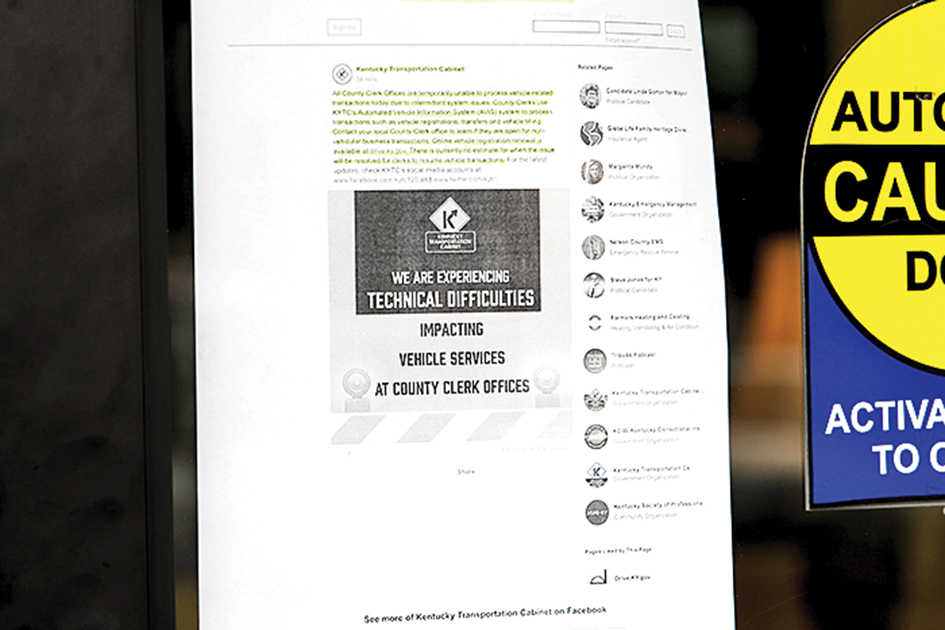 Horn said the troubles began when the state implemented a license plate portal the weekend before last.

“That’s when it kind of went haywire,” Horn said.

According to the state, programmers are trying to identify the issue and restore service as soon as possible.

“They’re working tirelessly to get things back on track,” Horn said. “But not as quickly as we want.”

The state was not able to say when the system interruptions will be resolved. They are advising customers to be prepared for delays.
The state is also in the process of transferring driver’s licensing offices to regional offices operated by the transportation cabinet. They recently opened a regional office in Lexington. Fayette County residents who need driver’s licenses, permits and ID cards, renewals or the new REAL IDs have to apply at the regional office, not at the circuit clerk’s office.

Mercer Circuit Court Clerk Allison Buchanan said her office is still handling driver’s licensing at this time. Buchanan said she has not been informed when the state would transfer services to a regional office or where that office would be located.

Last year, as a result of the COVID-19 pandemic, many offices were closed to the public and many services, such as renewing driver’s licenses, was made available online.

But the move to digital has exposed the aging computer infrastructure that handles most government activity, including issues that have been ignored in the past due to budget considerations. And it’s not just state offices being impacted. A 2019 study by the Government Accountability Office identified 10 different federal department with aging digital infrastructure. The Office of Personnel Management’s system was over 34 years old and the software was over 14 years old. The Social Security Administration’s system was over 45 years old. The oldest was at the Department of the Treasury, which was over 51 years old at the time of the report. Compared to those systems, AVIS is a relative youngster. While the transition has not been easy, Horn said the state was working to eliminate the disruptions.

“When 120 counties are having troubles, that gets their attention,” Horn said Tuesday.

Horn said he and his staff are also trying to do everything they can to help the public get through the transition. He is asking for the public’s patience.

“So far today it looks better than it has to date, so at least they’re making improvements,” he said. “We’ve got to get this resolved.”