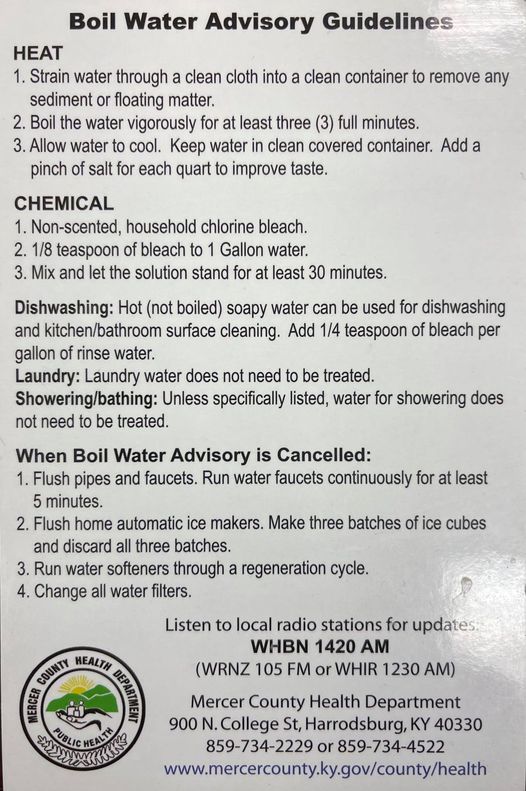 The City of Burgin issued a boil water advisory for the whole city on Tuesday, June 22, and again on Wednesday, June 23.

On Tuesday, Britney Smith, the water clerk for Burgin, said the advisory applies to the entire city.

Smith cited low chlorine levels as the reason for the boil water advisory. She said the levels had not gotten low enough where a state mandated would have been necessary, but it was low enough that the city wanted to alert the public.

“We felt more comfortable to go ahead and issue it,” Smith said.

Burgin gets its drinking water from the City of Harrodsburg, which has not issued a boil water advisory.

Duane Baker, the water plant superintendent for the City of Harrodsburg, explained that chlorine—which is widely used as a disinfectant—is only slightly water soluble, and its solubility decreases the warmer the temperature gets.

The recent heavy rains and high temperatures mean chlorine levels can drop at the extreme ends of the distribution system, Baker said. That’s one of the reasons why municipal systems flush their hydrants during the summer, to make sure chlorine levels stay consistent.

In addition, the treatment plant is upping the chlorine dosage to make sure levels stay within mandated limits.

Burgin is flushing their system as well, Smith said Tuesday.

“We’ll get samples this afternoon,” she said.