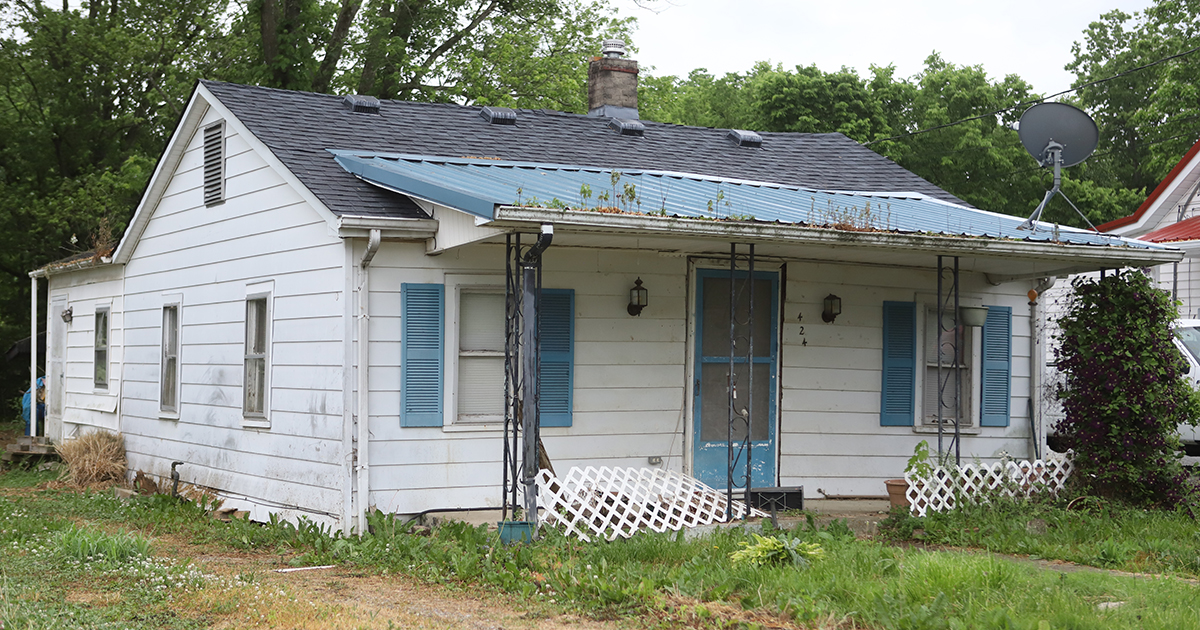 Donna Hawkins, owner of this house on Goddard Street, says she has not received any of the notices sent out by the City of Harrodsburg since 2016 and attributed most of the problems to trespassers. While some city officials are questioning the way the city has handled neglected properties, they still maintain that the ultimate responsibility rests with the homeowner. “As a property owner, you have an obligation to keep up your property to a minimum standard,” said City Attorney David Taylor. “You have an obligation to check and see.” (The Harrodsburg Herald/Robert Moore).

Since the collapse of the real estate bubble back in 2008, one of the biggest issues facing cities across the nation is the growing number of neglected, seemingly abandoned homes. But for the second meeting this month, the Harrodsburg City Commission has received a lesson that not every abandoned home is abandoned.

Donna Hawkins, who owns a property on Goddard Street, came before the commission Monday night to complain about issues at the property, which is vacant. Hawkins said employees from the city street department have gone onto her property, which is posted no trespassing, removing a fence and digging up trees, which they left piled against building and causing damage.

“There’s a big pile of rubble piled up in the backyard,” Hawkins said. “How is it legal to trespass on somebody’s property?”

City officials say they have gone onto the property in order to mow it and remove garbage. They said the fence on the side was clogging a nearby stream while the fence at the front of the property was on the road.

“I’m concerned that I’m not the only one that it’s happening to,” Hawkins said. “I don’t think it’s right.”

Two weeks ago,  Michael Vah complained about how the city handled the house he owned on Tabler Avenue, which city officials said had been condemned for a variety of issues, including lack of electric, sewer and water.

“My house is surrounded by vacant houses,” Vah said. He said one nearby house is full of vultures and snakes.

Vah said he had been left homeless and without a vehicle. While he was trying to get back on his feet, someone stole his belongings. “I lost everything,” he said.

Hawkins said she had lived on Goddard Street for over a dozen years before moving out about five years ago. She said she had not received any notifications from the city, even though she had left a forwarding address.

“If I had been notified I would have had it rectified,” Hawkins said.

Erich Ruehs, the code enforcement officer with the Harrodsburg Police Department, said he had been sending Hawkins letters since 2016 and the city has placed liens against the property. He said it was one of the top three properties in Harrodsburg for the number of complaints and produced letters of complaint from nearby homeowners.

“It’s been one of the most horrific code violations in the city’s history,” Ruehs said.

He said the property has been repeatedly cleaned since 2016, including removing human waste, which Hawkins attributed to drug users who trespassed onto the property. She said that’s why she had installed the fence.

While Ruehs said the property is “leaps and bounds better” than it was back in 2016, he said it still had a ways to go. He said he had mailed her on April 1 and May 6.

Commissioner Marvin “Bubby” Isham wondered aloud why the city had gone onto the property to clean it up but not finishing the job. “Why are we piling up the trash and leaving it?” Isham asked. “It looks like crap.”

“It’s not a matter of going in and cleaning up,” Ruehs said. He said the backyard was so full of debris, they filled nearly eight dumpsters back in 2016. “This will be cleaned up,” he said.

Commissioner Billy Whitenack, who was serving as mayor pro tem Monday night in the absence of Mayor Art Freeman, said Hawkins had not been given enough time to respond to the city’s letter.

“There’s no way she had seven days to cut it,” said Whitenack, who has previously criticized the way the city handles neglected properties. When Ruehs said the city had mailed Hawkins in April as well, Whitenack asked why they had taken over a month to mow the property.

“If you sent a letter, why are we only cutting it in May?” Whitenack asked.

Whitenack also questioned why the city was not using certified mail to notify property owners. Even though Ruehs could produce copies of letters he’d written, there was no proof Hawkins had actually received any of them. Ruehs said he had not sent certified mail because of the costs involved.

Whitenack, the former chief of the police department, said the city had not allowed Hawkins the allotted time to cut her yard. Whitenack and Commissioner Ruth Ann Bryant, a former dispatcher with the communications department, both said the letters have to be sent certified mail or served like warrants.

“I think the process needs to be changed a bit,” Whitenack said.

Hawkins said the trash the city had cleaned up had been thrown into the yard by neighbors, squatters and passers by. While she insisted she should not be held responsible because she had not been properly notified, City Attorney David Taylor pushed back against that idea.

Hawkins said she had been to the property multiple times over the past five years. She said the property would be taken care of from now on.

“Right now, there are no code violations other than the stuff piled up,” Commissioner Whitenack said. He city city officials would look at Hawkins’ property and see what they could do. “We’ll let you know what we come up with.”

In somewhat related business, Andy Miner asked about an abandoned building located on West Broadway Street. Commissioner Bryant said she had spoken with the late owner’s family. Bryant said they plan to return to Harrodsburg in July to tear down the house. She said they intend to keep the property in their family.

Miner and several other residents asked about the sidewalks on Broadway.

Commissioner Isham said the homeowner is responsible for maintaining the sidewalks in front of their homes.

Isham said a lot of sidewalks are in poor repair, but it’s not the city’s responsibility.

• Approved street closings and installing traffic signs, including a request from Debrah Pierce of MAFEW (Mercer Area Family Education and Wellness) to post “no through traffic” signs on Broadway and College Streets. Pierce said motorists take a shortcut across property.

The commission resolved to install no parking signs on the east side of York Street turning off Mooreland Avenue, on east side of Virginia Avenue and at the cul-de-sac on Hycliff.

They also approved closing Main Street for Oktoberfest, which happens Oct 1-3. Greg Souder of the Harrodsburg First Main Street Program said the festival, which was not held last year because of the COVID-19 pandemic, would be just a little different this year. He said they are anticipating a big turnout because of pent up demand. Souder asked to extend the closing from Office Street to Mooreland, but not all the way to the Opera House. He said they are planning on having a ferris wheel and carnival rides. They will be out of the way for Sunday so they won’t interfere with church services.

“We’ve got some big plans,” Souder said. “We feel like we’ll have a very successful event this year.”

The commission also approved closing on Chiles Street on Oct. 23 to accommodate the car show by Auto Kistoms.

They also approved a request from the Mercer Chamber of Commerce to shut down Magnolia Street for the car show during Pioneer Days Aug. 20 to 22.

The commissioners tabled a request by a barbecue vendor to set up at West Lexington and College Street. They will discuss the issue at the next meeting and possibly enact an ordinance.

• Made personnel moves. The commission agreed to hire Thomas Howells as a public service worker III in the water and wastewater maintenance department at $17.50 per hour effective June 1 and Tyler Satterly as a part time firefighter at $8.25 effective May 31. Both hires are contingent on the applicants passing background checks and drug tests. The commission also changed Chris Link’s employment status from full time police officer with the Harrodsburg Police Department to a seasonal school resource officer effective June 1. He will receive no benefits from the city. They approved rehiring Amy Earlywine part time effective June 1 at $17.60 per hour. Bryant voted against rehiring Earlywine, who resigned earlier this month as a fulltime employee.

“Once you hand that paper in, that’s it,” Bryant said.

• Disposed of surplus equipment. The commission voted to transfer an 18 foot trailer acquired through the Defense Logistic program by the police department to waste water treatment plant, transfer a 2003 Chevrolet 1500 acquired by the police department through the defense logistic program to the cemetery department. The commission agreed to sell a surplus equipment originally acquired through the Defense Logistic Program online. The equipment includes a 2003 Ford Expedition, a John Deere 450C Bulldozer, three diesel generators and a Bob Cat backhoe attachment.

• Approved a request from CAFCA (Children and Family Counseling Associates) to use Lions Park Community Center on July 29 free of charge to provide training to mental health professionals.

The next meeting of the Harrodsburg City Commission will be on Monday, June 7, at 6 p.m.

For more great stories, check out this week’s edition of the Harrodsburg Herald. Click here to subscribe to the online version.