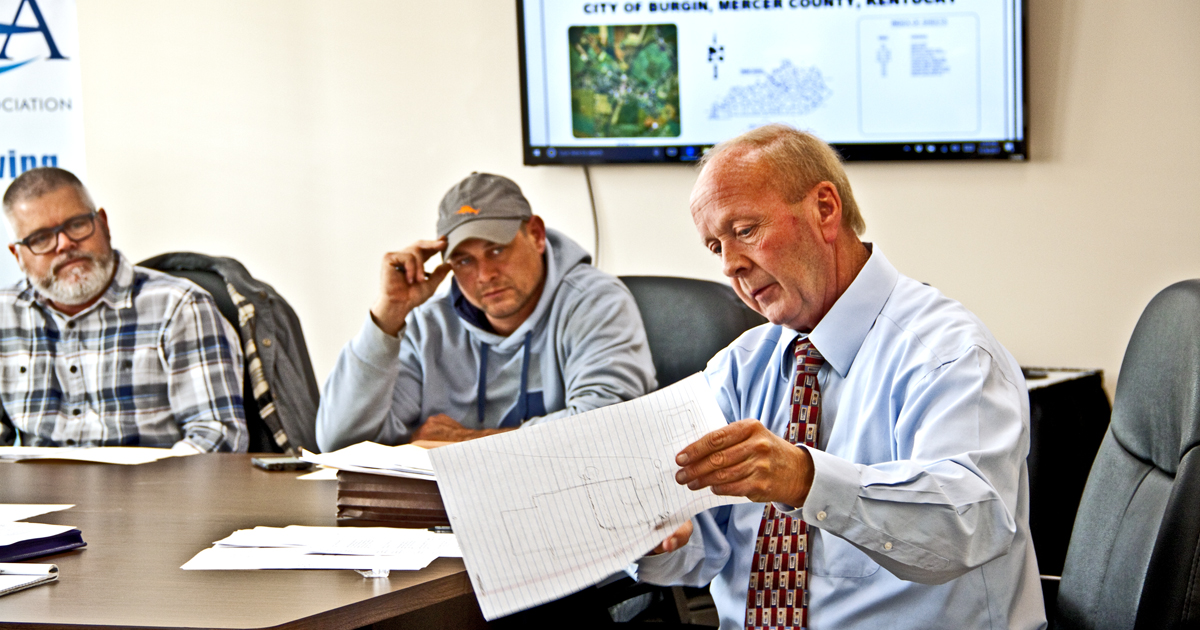 Larry Catlett (right), attorney for the Mercer County Sanitation District, discusses an issue with the board of directors, including Bruce Wade (left) at a meeting a few years ago. (File image).

Herald Staff
rmoore@harrodsburgherald.com
The Mercer County Sanitation District held off on making any decision on possible changes to their sewer rate fee schedule until they had more up to date information.
At last week’s board of directors meeting, the first one held in person in nearly a year, several board members showed interest in changing the rate schedule, which, once approved, would also need to be approved by other entities, including the Mercer County Fiscal Court, the state government and USDA Rural Development.
Mike Sanford, executive director of the sanitation district, said the majority of customers would see either no change or a reduction in their rate. However, about 16-percent of users would see a $16 a month increase in their bill.
Sanford said commercial users would see the most impact, as well as people with larger than average size families.
“The majority of the customer base will not be affected that bad,” Sanford said.
However, he said the spreadsheet they are using should be updated. Sanford said they were using numbers from two years ago.
He wondered if adding a new rate for customers who use 1,000 or less gallons a month-mainly people living alone-would help.
The sanitation district has been under considerable political pressure to change their rate schedule, especially by customers with the Burgin sewer system.
However, the rate changes being considered would apply to all of the district’s customers, not just Burgin.
Board Chairman James Dunn said he wanted to take action.
“Move along. We can tweak and tweak and tweak and tweak and tweak some more,” Dunn said. “Sometimes you’ve just got to make a decision and move on.”
Board member Drew Rice agreed, but Sanford said he thought getting a rate for smaller users would be the best idea.
No action was taken.
Financially, the pandemic has taken a toll on the district’s finances. According to Sanford, they are running a budget shortfall, which he attributed to lower usage as fewer visitors came to the area and an increase in chemical fees. The district has had issues repaying its debt in the past. Sanford said they would pay late on debt service again this year. He said the district’s finances “will be a little tight,” but they would be able to pay it.
Sanford said the board approved their last budget with no idea how the lockdown would impact their finances.
“Hopefully, going into next year, the surprises won’t hurt us,” Sanford said. “Surprises hurt us.”
He said flows are back to normal at Bright Leaf Golf Course-one of the district’s biggest customers-and Burgin.
Sanford said they would start to see flow increases now that all the marinas on Herrington Lake are open, especially with Memorial Day coming up.
The next meeting of the Mercer County Sanitation District will be on Thursday, June 13, at 2 p.m. at 801 Pleasant Hill Drive, Burgin.

For more great stories, check out this week’s issue of the Harrodsburg Herald. Click here to subscribe to the online version.