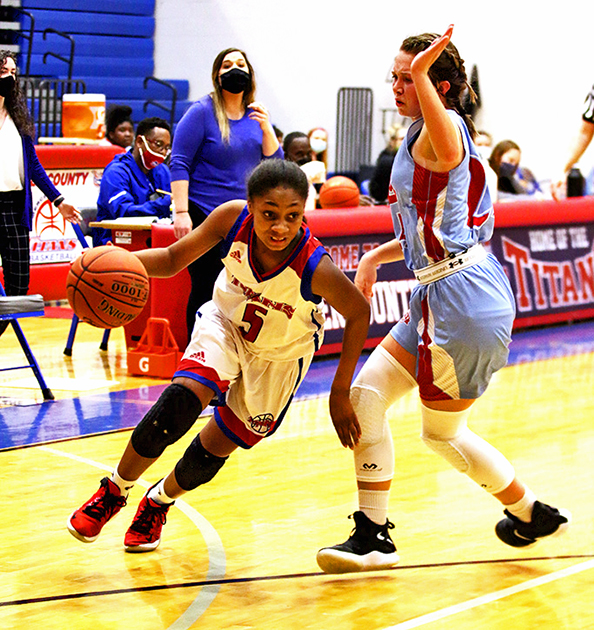 The Mercer Lady Titans came away victorious against the West Jessamine Colts on senior night. Before the game they recognized two senior players, Stevie Shepherd and Ry’Ann Tharp.

The two seniors have been a part of 86 wins, four 46th District titles, 3 12th Region titles, one 2A Sectional Championship, one 2A State Runner-up team and one KHSAA State Championship.

“I have had the privilege of coaching these two since middle school, they are both great young ladies and have had a significant impact on our program,” said Coach Hayley Spivey. “They have both been asked to take on a more prominent role this year-and have risen to the occasion. They have both been playing their best basketball as of late, which is great heading into tournament time.”

On senior night, nothing is more fitting than for one of the seniors to come out and hit the first bucket of the game and that is exactly the way it played out for Shepherd. Only 30 seconds had ticked off the clock when Shepherd knocked down a three-pointer to give the Lady Titans a 3-0 lead. Tharp followed suit just a minute later with her first of three treys for the game and Mercer was up 8-2. Shepherd added a two point basket and Tharp hit her second three of the quarter, helping Mercer to a 10 point lead at the end of the first quarter, 16-6.

The second quarter started with Anna Kate Drakeford getting back-to-back buckets that pushed the lead to 20-6.

West answered with six straight points to cut the lead to eight, but a free throw each by Timberlyn Yeast and Jersey McGinnis followed by Tharp’s third triple extended the lead back to thirteen with 4:20 left in the second quarter.