Community Theatre Gets A Facelift During Pandemic 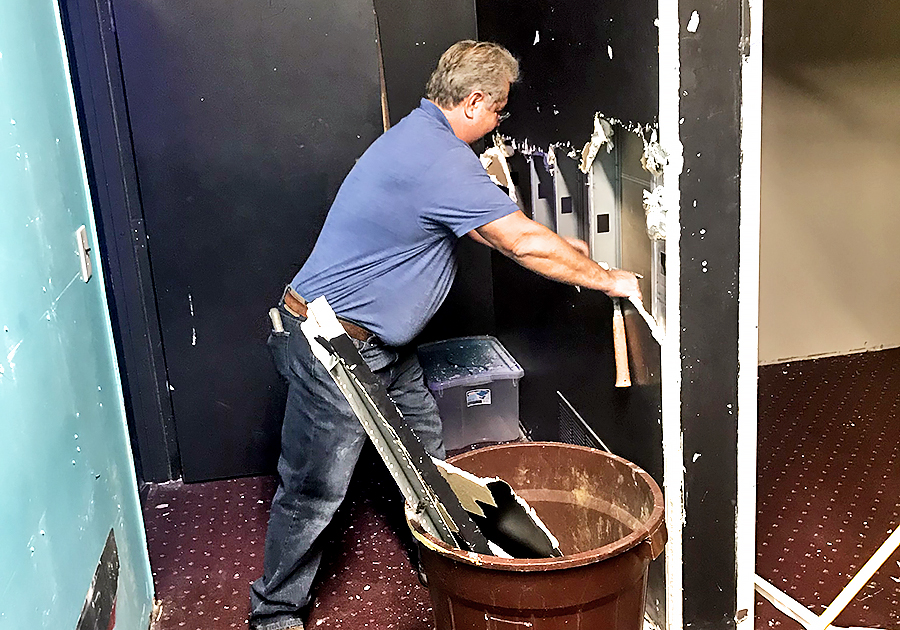 Ragged Edge Community Theatre has been forced to close their doors to theatergoers during the COVID-19 pandemic, but that didn’t stop Managing Director Allan Barlow from staying busy.

“I thought I would make use of the down time and complete the construction projects we had started,” said Barlow.

Renovations started at Ragged Edge in 2017 during the United Way Day of Action.

“In 2017, volunteers from Corning and the Girl Scouts helped strip wallpaper, paint and remove stacks of unneeded furniture,” said Barlow. “The project continued on and off for the next year and a half as kitchen, board room and entryway were re-plastered and painted.”

In 2019, the theater secured a $15,000 grant from the Kentucky Colonels to continue the renovations.

“On Nov. 25, 2019, demolitions started on the theater, but plumbers discovered the sewer main beneath the building was cracked and was a disaster waiting to happen,” said Barlow. “Thanks to a grant from the Corning Foundation, the repair was made and RECT now has plumbing that ought to carry it well into the 21st century. Volunteers Brad Logan, Tim White and Henry Webb located and repaired leaks upstairs, allowing RECT to have a fully functioning kitchen and bathroom on the second floor for the first time in at least 10 years.”

Primary construction was completed by February 2020, just as Junie B. Jones opened in the theatre.

“As the COVID crisis began and quarantine restrictions were put in place, rehearsals for the Miracle Worker were suspended with no clear idea when we would resume,” said Barlow. “I  decided to take on completion of the dressing room project.  A generous donation from an anonymous donor allowed for the purchase of paint, trim, make-up mirrors and make-up mirror lighting.”

By June, the dressing rooms were complete and Barlow moved to the upstairs production areas.

“Fifty plus feet of hanging rod were installed so that every costume item is visible and nothing is out of sight in a box or bin,” said Barlow.  “Space was also made to create an actual costume shop where a cutting table and sewing machines can be located.”

As 2020 draws to a close, Barlow is still trying to make the best out of the situation.

“Well, the corona situation continues to derail and disrupt our old familiar ways, and we have been trying to think of how to make lemonade out of the mountain of lemons we have been handed. We are looking into theater camps since we cannot do actual shows,” said Barlow. “Kids learn the same important life skills in theatre camp that they do from doing a show: cooperation, teamwork, creativity, public speaking skills in addition to language arts skills such as recognizing good story structure and characterization.”

The camps would run four  weeks, two days a week, two hours each day, according to Barlow.

“We would take no more than six kids for any given session. Sessions would be Mondays and Wednesdays, and then Tuesdays and Thursdays, ages 8-12,” said Barlow.

Barlow said there would be strict public health protocols in place during the camps.

“Each four-week camp would have its own focus like, improv, playwriting, mask work and Shakespeare. So kids could do multiple camps,” said Barlow.