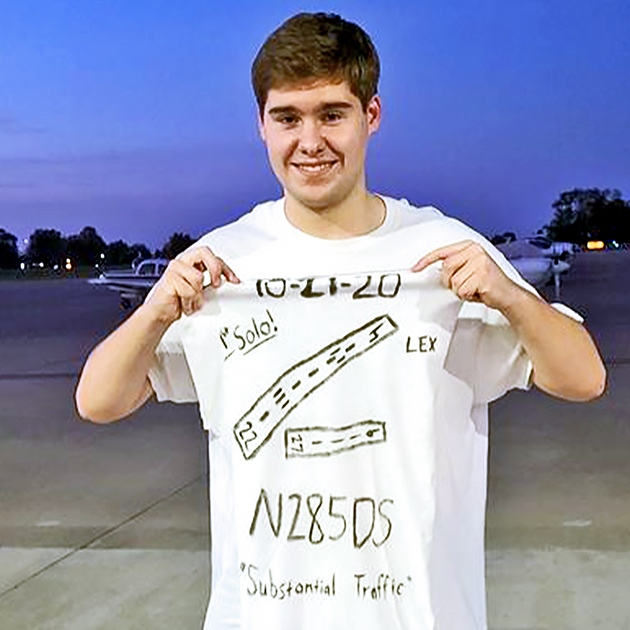 (Photo Submitted)
Phillip Maxfield displays the shirt his instructor made to commemorate his first solo flight.

Phillip Maxfield has his head in the clouds. And that’s a good thing.

The son of Ric and Karen Maxfield of Salvisa, Maxfield is training to be a pilot.  He took his first solo flight in Lexington this past month. He flew a Diamond DA-40—a single engine four seater airplane—while talking with the control tower.

The first solo flight is a big day in a pilot’s life. After Maxfield landed, his instructor wrote down the plane’s tail number, the runway he used and the airport identification on Maxfield’s shirt, then cut off the shirt tail. It’s a tradition among pilots that dates back to the early days of aviation.

Now that he’s soloed, Maxfield said he has to perform cross-country flights to earn his license. A senior at the Christian Academy of Lawrenceburg, Maxfield said he plans to fly for a living after he graduates.

Maxfield said his love of flying goes back as far as he can remember.

“I’ve always had a passion for aviation,” he said. He said he plans to get a commercial pilot’s license and possibly get a job in commercial aviation, hopefully as an airline pilot.