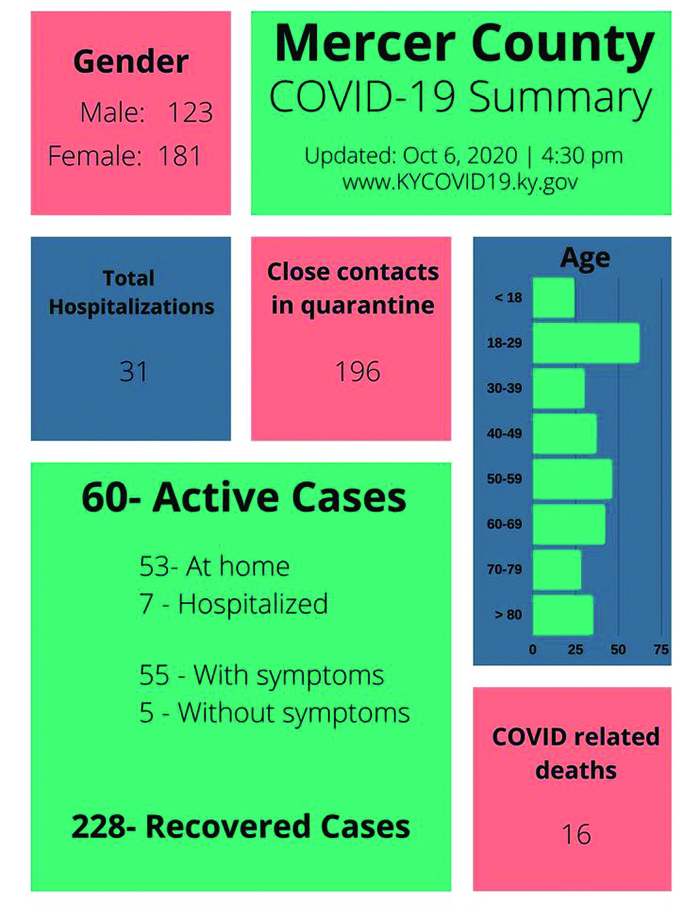 Gov. Andy Beshear said he was looking to step up state efforts to enforce the measures taken to fight the spread of the coronavirus which causes COVID-19.

Last week, Kentucky had a record number of new infections—6,126. Beshear called it the third escalation the commonwealth has gone through since the first patient in Kentucky was diagnosed in March.

“We have the power to stop it if we do what we know what works,” said Beshear, who said he re-upped the state’s mask mandate for another 30 days.

The governor said he had spoken with leaders at the local level to step up their enforcement efforts. Asked Tuesday about possible penalties, Beshear said  he hopes most incidents can be resolved through conversation. But he said businesses that continue serving people who refuse to wear masks could be shut down.

At the local level, the number of confirmed cases rose from 301 to 304 on Tuesday. According to the Mercer County Health Department’s latest update, there are currently 63 active cases with seven hospitalizations and 16 deaths. There are 196 close contacts in quarantine. So far, 228 are listed as having recovered.

The county’s incidence rate has declined from a high of 31.3 infections per 100,000 people last week to 16.3 per 100,000 on the latest state map. Mercer is still in the orange and has a higher incidence rate than any other neighboring county except for Garrard County, which has an incidence rate of 21 per 100,000. Mercer is listed in the red on the White House Coronavirus Task Force’s latest report, which was issued earlier this week.

So far, 12,751 Kentuckians are listed as having recovered.

On the national level, there have been over 7.7 million confirmed cases in the United States, which remains the global epicenter of the COVID-19 update. According to Worldometers.info, 32,932 new cases were reported by press time Tuesday.

For more, check out the Harrodsburg Herald print edition or subscribe to the online edition at www.harrodsburgherald.com.