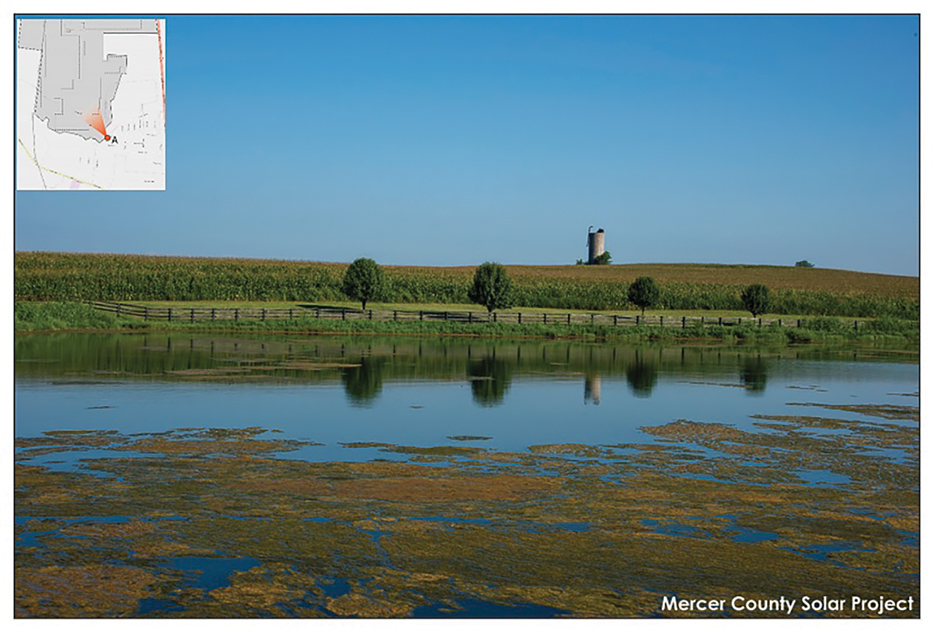 Image provided by Savion. The proposed site of a solar farm on US 127. 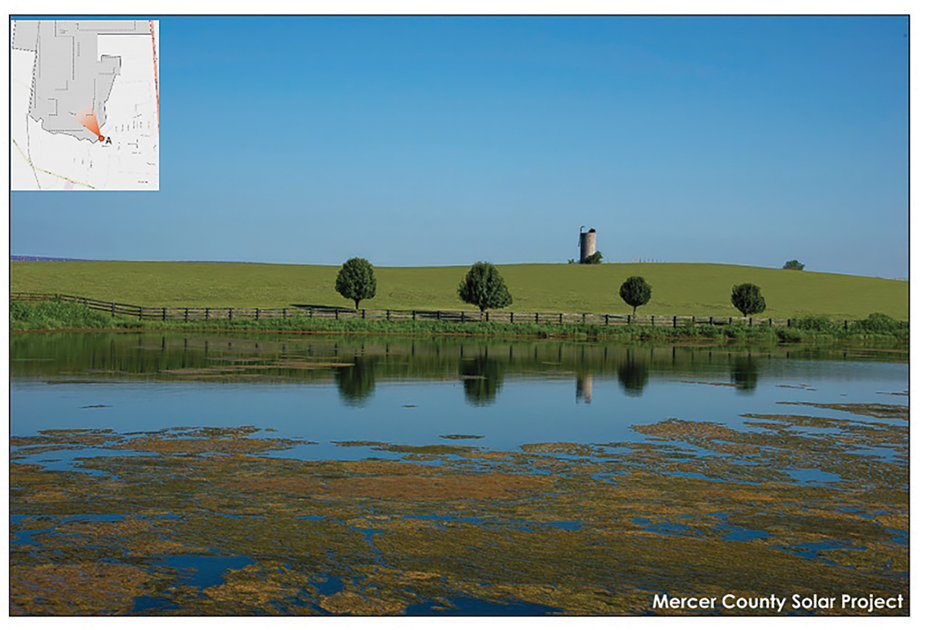 Image provided by Savion. A computer simulation of the proposed solar farm from US 127. The solar panels can be seen to the left of the image.

On Tuesday, the Mercer County Fiscal Court gave first reading to an ordinance that could allow a proposed solar farm to be built along US 127. The court also hear public comments from people opposed to the project and people who supported it.

To be exact, the fiscal court gave first reading to an amendment to county zoning ordinances that would allow solar farms as a conditional use on agricultural land and R-1 residential land which is both undeveloped and adjacent to agricultural zoned lands. The amendment would allow projects approved by the Mercer County Board of Adjustments to be built on multiple lots. If approved, the projects would not be subject to setback requirements. If a majority of the magistrates vote to approve the amendment, it would take effect after the second reading.

Local sheep farmer Jim Mansfield, the past president of Kentucky Sheep and Wool Producers Association, said a solar farm would be an opportunity for local sheep producers.

“Under the right circumstances, it’s a good deal,” Mansfield said.

Len Goodpaster, a farmer who has spoken against the solar farm previously, said there was a lot of misinformation about the project.

“I don’t think we’re getting that information through the media right now,” Goodpaster said. He said the vast majority of the population is against the project. He said the county needs to protect farm land.

“How much of this county do we want covered up with solar fields?” Goodpaster said.

He said he had researched solar power, especially the resistance to solar facilities here in Kentucky and in neighboring states. Goodpaster called the need for solar power by local business and industry “a lot of bunk.”

“If this amendment passes, you will change Mercer County,” Goodpaster said.

Mark Edwards said  everyone benefits from the power produced here in Mercer County. He said it was important to ensure that the power is produced safely. Edwards said the panels are guaranteed for 25 years and often last longer. While some opponents have expressed concern over the rare elements used in solar panel construction, he said no concerns have been expressed over the larger number of flat screens in every home in Mercer County.

William Bugg said he doesn’t believe the issue is that Mercer residents are for or against solar power. He said they are unprepared for solar power.

“We don’t need to make an uninformed decision,” said Bugg, who noted that the developer, Savion, had spent three years and $600,000 in due diligence on the property.

“We don’t need to feel rushed to make a decision here,” said Bugg, who said the property and the transmission lines were not going anywhere. “If they can’t wait for that, we need to let them pass.”

While no academic study has found a link between solar farms and lower property values, Bugg said his realtor told him he needed to lower the price of his house, which he said is for sale.

“We’re just not ready, Mercer County, we stand to lose a whole lot more than we stand to gain on this project,” Bugg said.

Mike Willand, the executive director of the Harrodsburg-Mercer County Industrial Development Authority, repeated an old joke that Harrodsburg has not changed since James Harrod went to find Swift’s Silver Mine.

“That’s not true, but it’s the perception of people outside Mercer County,” Willand said.

He said the county’s population is in decline and that puts Mercer at a disadvantage. Large industry—like Hitachi—is going toward solar, Willand said. He said solar is one of the fastest growing vocations in the country, with wages averaging $42,000 a year.

“There are communities that would beg for a project like this,” Willand said. “We’re in the danger of becoming a declining community.”

Phil Crump, who sits on the industrial development authority’s board of directors, noted there are solar farms here in Mercer County as well as Marion County. Crump said the future is in renewable electricity.

“Mercer County has not done much over the past 15 years,” he said. “If we don’t do something to help this community. “We’re not going to grow.”

John Cotten, the general manager at Wilderness Trace in Danville and a Mercer County resident, also spoke for the text amendment. Cotten said his sons work outside the county because there are no jobs in the county.

He noted Mercer currently has 136,000 acres of farmland and said Savion is asking for a small percentage. He also noted that, if the text amendment is not approved, the land could be used for an industrial hog farm, and it would not raise more in tax revenue than the proposed solar farm.

Cotten said Boyle County had recently approved a similar measure, and had even moved to defray some of the developer’s costs.

“We have an opportunity here,” Cotten said.

“No investment company is going to stand around and wait forever,” he said. “Are we going to do this or not?”

“Coal is going away, folks,” Schneider said. “If we want to keep the lights on in Mercer County, we’ve got to look at it.”

Former Mercer County Judge-executive John Trisler also spoke in favor the farm. Trisler, who is HMCIDA chairman of the industrial development authority’s board of directors, said he had been on the fence until recently.

“I do think Mercer County is at somewhat of a stagnant situation,” said Trisler, who said he owns a farm in Kirkwood area. He said he understands the concerns, “But I’m more concerned about the future.”

Trisler called the solar farm another opportunity for the community to move ahead. He said he couldn’t guarantee the project could bring jobs, but he thought it would be a good step forward.

The final speaker was Drew Gibbons, the project manager for Savion, who showed the magistrates visual simulations of the project.

Gibbons repeatedly noted that the text amendment does not approve the Wilkinson Farm project. He said the project could not be built without a conditional use permit.

Addressing some of the objections against the solar farm, he said Mercer’s farmland is safe. He said only a fraction of the farmland is suitable for solar projects, which have to be next to transmission lines.

As for restoring the land to its original condition, he said that could be enforced through an agreement or through zoning. If the project is approved, he said over 400 acres of land at the site could still be farmed.

Savion has held two virtual neighbor meetings, he said. In addition, the company is opening a local office and have started a petition to show support. Gibbons said they had already collected 100 signatures. He said they were also looking at partnerships with local schools.

In addition, Savion has  conducted studies on the solar farm’s impact on the community and have drafted the PILOT (Payment In Lieu Of Taxes) agreement which had been shared with the fiscal court. He said the county would receive $260,000 a year for 25 years, while the state received $40,000 a year. Gibbons said studies of six similar projects have shown no significant impact on property values.

Savion engineers have  updated the project design,  and increased the setbacks. He said they were consolidating the project, including using higher wattage panels. He said the project has been pushed behind the ridge and could barely be seen, he said. In other areas, they were planning landscaping to screen the panels from neighbors.

Even if the solar project gets local approval, Gibbon said state approval would take eight to 12 months. “It’s a long process,” he said.

Again stressing that the text amendment would not mean the Wilkinson Farm project is approved, he asked the fiscal court, “Does the county want to consider solar on a case-by-case basis?”Anyone who wants to learn more about the proposed solar farm can visit online at www.mercercountysolarproject.com.

The fiscal court will vote on the text amendment at their next meeting on Tuesday, Oct. 13, at 10 a.m.

• Gave second reading to ordinance repealing ordinance 96-57 and a portion of 82-18, which prohibited carrying concealed weapons on city property. The amendments bring the county in line with current state law.