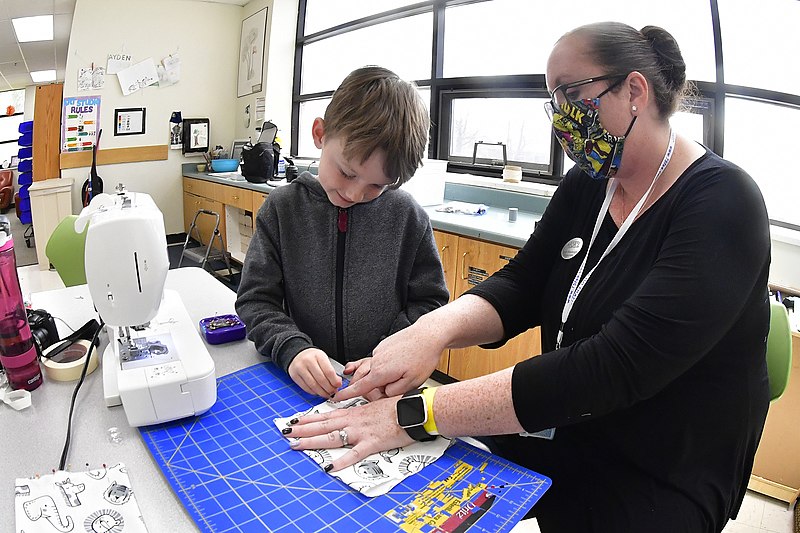 A boy, left, pinning the mask material to a pattern is helped by Sarah Wheelwright, school age coordinator, at the Youth Center April 8, 2020, at Hill Air Force Base, Utah. Children at the center have taken on the task of creating masks for themselves and for caregivers at Hill’s Youth and Child Development Centers. (U.S. Air Force photo by Todd Cromar.)

On Monday, the state released new guidance on childcare and childcare providers.

Under the new guidance, licensed care facilities can increase the number of children allowed from 10 to 15. Certified homes along with licensed infant and one-year-old classrooms can return to their typical group size.

The state is also making accelerated licensing is available for partial-day and employer-based providers. There would also be a $2,500 startup incentive bonus through the CARES Act.

“We also recognize our children’s need to learn and socialize and the essential role of childcare for working parents,” said Eric Friedlander, secretary of the Kentucky Cabinet for Health and Family Services. “It is good that everyone is now recognizing the importance of child care.”

He said childcare allows parents to return to work, but there are child care deserts across the state. In addition, some parents, concerned their children may not be able to keep up once in-person instruction resumes, are working together in small groups—podding—to provide nontraditional instruction.

Under the new guidance, the state will provide background checks on nontraditional instruction providers and monitor to make sure staffers are masked, use proper hygiene, enforce health checks and small group limitations and have a plan in place for when someone tests positive for COVID-19. 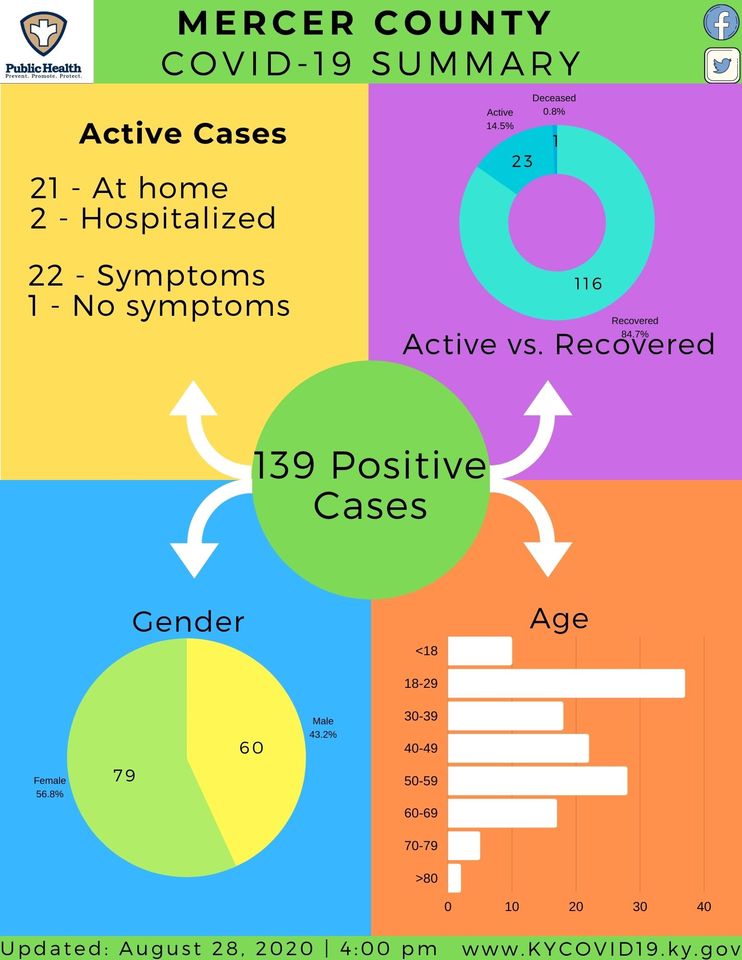 The governor announced 381 new cases on Monday, raising the state’s total to 48,396. According to the state, 43 of the new cases are children aged 18 and younger, with two children aged five and under. The youngest is a one-year-old from Madison County.

“We always have lower numbers on Sundays and Mondays, due to lab closures over the weekend. But the White House report for this week still has 59 of our 120 counties in the red or yellow zone,” Beshear said.

Three new deaths were reported Monday, the youngest a 61-year-old man from Lincoln County. So far, 933 Kentuckians have died due to the coronavirus.

As of Monday, there have been at least 877,443 coronavirus tests performed in Kentucky. The positivity rate currently stands at 4.42%. At least 10,375 Kentuckians have recovered from the virus. For more information, visit ky.covid.gov.

Across the world, there have been over 35.6 million reported cases, with 853,858 deaths. So far, over 17.9 million people have died, according to worldometers.info.

The governor was asked Monday about adopting a herd immunity strategy to fight COVID-19. Beshear called the idea “incredibly reckless”and said the nation would lose over a million people if the idea was implemented.

According to the Washington Post, Dr. Scott Atlas, a White House pandemic adviser, has advocated for lifting restrictions so the healthy can build up immunity to the disease. Atlas is the Robert Wesson Senior Fellow in Scientific Philosophy and Public Policy at Stanford University’s Hoover Institution and a member of Hoover’s Working Group on Health Care Policy. A neuroradiologist, he has no expertise with the studies of infectious disease or epidemiology.

According to the Post, Atlas has pushed the White House to adopt a herd immunity approach similar to Sweden. The Scandinavian nation, which has a population of a little over 10 million, has recorded 83,958 confirmed cases and 5,821 deaths. According to Johns Hopkins University, the fatality rate in Sweden is 6.9 percent, which is over three time the fatality rate in Kentucky.

Even if the fatality rate did not grow to match Sweden’s, Dr. Steven Stack, the commissioner of the Kentucky Department for Public Health, said herd immunity could be a disaster. Stack said to achieve herd immunity, 70-percent of the nation’s population—over 200 million people—would have to be infected. That would mean over four million Americans could die.

“It’s not just reckless, it’s irresponsible,” said Stack, who was an emergency medicine physician in Lexington before being appointed commissioner by Gov. Beshear and has no expertise with the studies of infectious disease or epidemiology.

According to the Post, Atlas declined requests for an interview but released a statement through the White House: “There is no policy of the President or this administration of achieving herd immunity. There never has been any such policy recommended to the President or to anyone else from me.”

Stack was asked Monday about the possibility the state may be overstating the number of deaths caused by the coronavirus. The Centers for Disease Control and Prevention website says six percent of COVID-19 deaths are from COVID alone, with 94 percent attributed to the virus and co-morbidities such as heart disease, high blood pressure, cancer, diabetes or lung disease. This has led some to claim that COVID-19 has killed only 9,000 Americans.

Stack said the state takes steps to make sure deaths attributed to the coronavirus are accurate.

“We have said all along that this is a disease that affects older folks—people who are 60 or older and people with other health conditions,” Stack said.

A study conducted earlier this year by the Kaiser Family Foundation found that almost half the adult population of Kentucky—nearly 1.6 million people—are considered at risk of serious illness if they get COVID-19 due to underlying health issues.

Kentucky leads the nation for incidence of many of the most common COVID-19 co-morbidities such as diabetes, heart disease, asthma and COPD.

Gov. Beshear called the politicization of the pandemic a shame, especially after Kentucky just recorded its highest week for new cases. He urged people to continue practice social distancing, to wear masks and wash their hands frequently.

“How many do you need to believe it is really happening?” the governor asked.