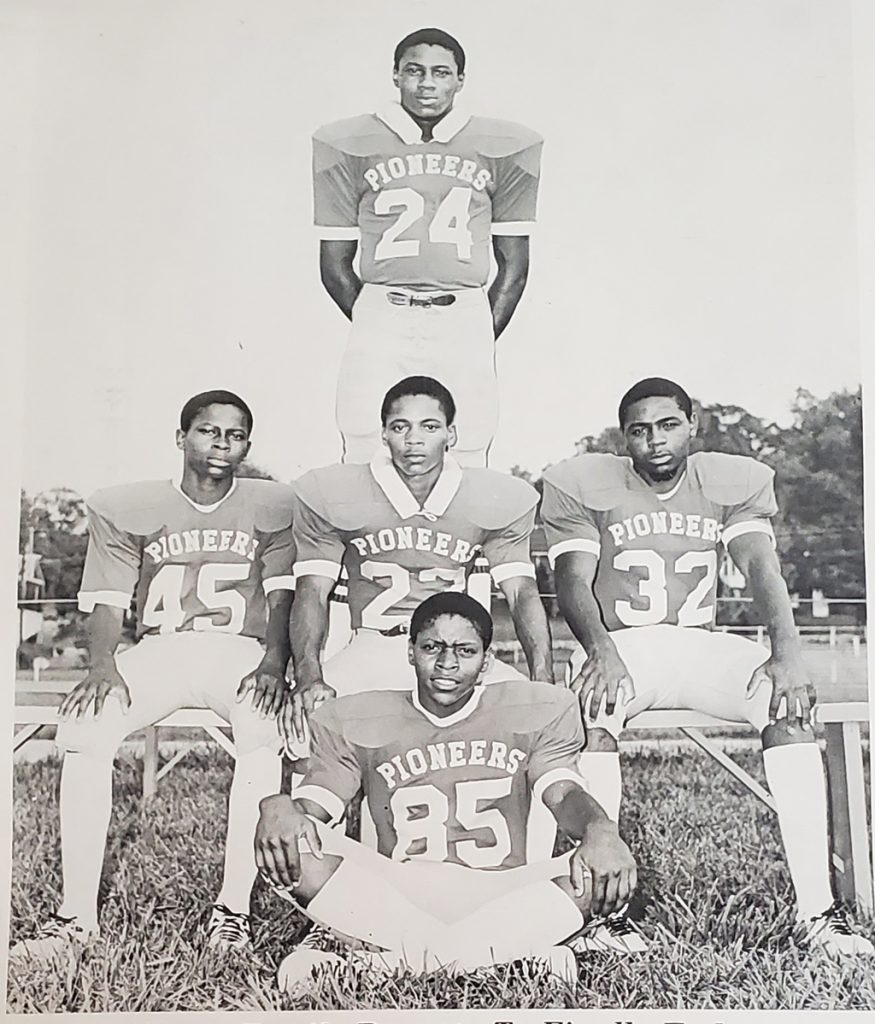 Three generations of fantastic athleticism and pride in Harrodsburg is one way to summarize the Yeast tradition. The Yeast family is a staple of the Harrodsburg community, and they have been shattering the standards of both Harrodsburg Pioneer and Mercer County Titan athletics for over 50 years.

Leroy and Catherine Yeast’s five sons and five daughters developed a tight-knit family bond that enveloped not just their own household, but the entire town. The field next to their house off North Magnolia Street in Harrodsburg was full of friends and family who came to play any sport.

An important part of the Yeast family’s athletic success is that they push one another, either directly or by example.

“My main goal was to try to be as good or better than my older brothers,” said Nick Yeast. “That’s all I ever wanted, I just wanted to be as good as my big brothers. That’s just the way it was. We did everything together. We were playing football there on the farm, it was always competitive.”

The youngest of the five brothers, Nick was a former fullback and linebacker on the Pioneers football team, as well as a varsity baseball and basketball player. Graduating in 1978 meant that Nick watched all four of his older brothers play football for the Pioneers, often lining up beside them from a very young age. Nick continued his football career at Eastern Kentucky University as a fullback and scored the Colonel’s game-winning touchdown in the third quarter of the 1982 Division l-AA Football Championship game, defeating Delaware.

On the opposite end, Bo Yeast is the oldest of the five brothers and one of the first great Pioneer running backs. His style and determination was influential to later Harrodsburg ball carriers, and his success running the ball in the single-wing offense convinced coach Alvis Johnson to adopt the offensive system. Bo was the leading scorer in the state of Kentucky in 1973, scoring 191 points. Following his senior season, Bo was chosen the best running back in Kentucky and voted AP first team all-state. He originally went to Iowa to play college football, but his parents said he was too far away from home, so he transferred to Morehead State, where he was handed the ball by future Super Bowl winning quarterback Phil Simms.

Bo enjoyed helping and playing football with his brothers. He knew he was a role model, and he made it count.

“It was awesome, being able to have all your little brothers behind you. It was great, everybody being there together and helping each other out,” said Bo.

Bo and Nick’s nephew, Terry Yeast, remembers following Nick around to watch his games as a Colonel. Loading up a van packed with family members and driving to watch Nick play are some of Terry’s favorite memories. Terry learned what it took to reach the next level before he was in high school. Terry followed in his uncle Bo’s footsteps in 1988 when he began playing football for the Morehead State Eagles. Now he is an assistant principal at Mercer County Senior High School, and has helped lead the Titans track and field team to three state championships in just four seasons of coaching.

Donald Wayne Smith is the son of Alicia Smith, the second oldest of Leroy and Catherine’s 10 children. Smith took the field in 1982, just five years after his uncle Nick carried the ball for the Pioneers, and eventually broke his uncle Bo’s record, becoming the leading rusher in the history of Harrodsburg High School.

“As a family growing up we just knew,” said Smith. “In the field, working hard, pushing you to do the best that you can do, that’s just how they were,” said Smith. “When you come from a family like that, those uncles all played at the highest level and there is just an expectation and sometimes you don’t even realize it.”

The community of Harrodsburg has always been important to the Yeasts, and family is always kept close.

Bobbi Jo Yeast, the youngest of the 10 siblings, dominated the track in the late 1970s, winning the Class A state championship in 1977, with teammate Ronda Boyd-Parks and herself being the only two Pioneers who competed at the meet. She spoke about the familial mindset that enveloped Harrodsburg in the late 1970s and about the development of friendships that come with sports.

“We had a big field in our yard and all the kids would come and they’d play basketball, football and baseball in that field by the house, so it was just a city thing, everybody was always together. It was a family,” said Bobbi Jo Yeast. “Love and family there’s nothing more you can say about that, and we all loved Harrodsburg.”

Nick Yeast says his mom and dad were all about family. The nickname given to the field beside their house where everyone in the neighborhood would gather and play was the original field of dreams.

Nick recalls little league football in his family, playing with, and against his brothers. He specifically remembers one season in which four of the brothers were on one team while the other played on the opposing team. “I remember he used to tackle us and dad would be over there saying, ‘that’s your brothers, boys, don’t be hurting your brothers.’ They would almost tap you and lay you on the ground. It was like that in everything, it was real fun,” said Nick.

There was a sense of competition too. Bo says he and his brothers were very competitive with one another, but not on the football field, in the hog pen.

When asked if his athletic success was influenced by his upbringing, Bo replied, “Yeah, they made us keep our heads on straight, and made us think that nobody was better than each other.”

Nearly all members of the Yeast family were coached by legendary Harrodsburg coach Alvis Johnson. Johnson spoke highly of the whole Yeast family, but Robbie in particular, he says was the greatest player he has ever coached.

“He would literally knock your head, because he’d go from sideline to sideline,” Johnson recalled.

Of all the talented athletes to play football under Johnson, including many who played in the NFL, he says Robbie was the best.

Influencing young athletes comes naturally to many members of the Yeast family.

Bo has lived in Harrodsburg his whole life, He loves the community and it will always be enough for him. There is always a smile on Bo’s face when he’s working at Mercer Area Family Education and Wellness, formerly the Harrodsburg YMCA.

“This is home. At the Y, I love the kids around here, I’ve been at the Y for 44 years, and I’d rather be no place else but Harrodsburg, little old Harrodsburg,” said Bo.

“Coaching was more rewarding for me than playing, because it meant that I got to influence lots of kids whether it was in football or track and field,” said Terry Yeast. “Being able to influence kids to be better, believe in themselves and to have success all of those things were big for me, and that was more of a success than any game I played or contributed in. I love what I can do for the young people.”

Bobbi Jo’s son Craig Yeast was a lockdown cornerback and star of the offense when he played for the Pioneers. He went on to become one of the greatest wide receivers to ever play at the University of Kentucky and eventually, a fourth round draft pick in the NFL.  Craig said he was just trying to do his part to continue the Yeast legacy.

“I was trying to live up to the legacy that my uncles and cousins before me had left out on the court and field,” he said. Craig’s son Russ Yeast is continuing that legacy as he heads into his junior season of college football as a defensive back for the Louisville Cardinals.

Craig has found his future in coaching as well. He  is head football coach of the Kentucky Wesleyan College Panthers, and he says his family is an important reason he has made it this far.

“It has helped me grow as a person, as a former athlete and as a current coach, it’s just that accountability, and that love and support you get from your family that has carried me to this point, and I’m very thankful for my family,” he said.

It has been nearly 50 years since Bo Yeast picked up a football for the Pioneers, but the Yeast family is still changing the landscape of Titan athletics. Timberlynn Yeast, daughter of Terry Yeast, is a leader on the Lady Titans basketball team, averaging 17.3 points and 8.2 rebounds per game heading into her junior season. Bryce Yeast, son of former Pioneer and Ohio State football player Julius Yeast, was the leading tackler on the Titan football team last year, tallying 133 tackles. He plans to continue his football career this fall at the University of the Cumberlands.

The Yeast family has represented  Harrodsburg and Mercer County for over half a century. Every Yeast athlete carries a sense of pride in their last name.

For some, that legacy might seem daunting. Craig Yeast said it inspired him.

“I was raised that your name is everything,” he said. “One thing that nobody can take away from you is your name. To carry that last name, from Harrodsburg, Kentucky, and represent my family, absolutely I am honored and privileged, there’s nothing like it.”