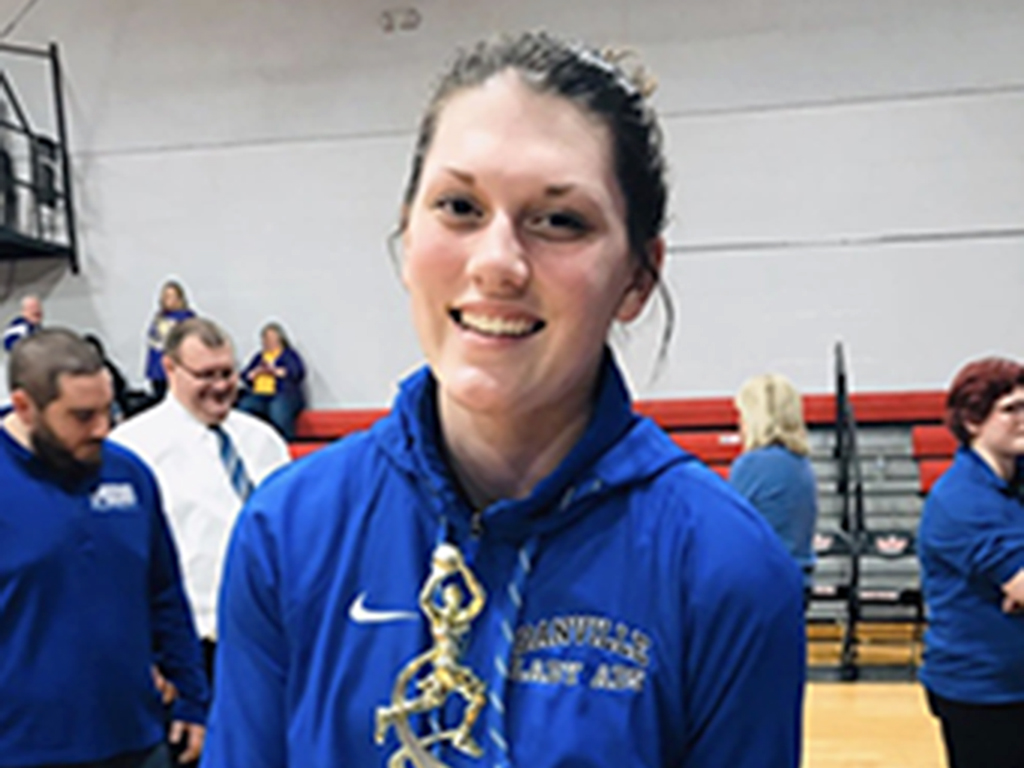 Photo submitted
Preston seen holding the 12th Region All “A” Classic trophy after defeating Somerset last season. Preston says she is looking forward to competing in the All “A” Tournament again this upcoming season.

Preston scored 10.8 points per game last season, the highest of her career, to help lead the Lady Admirals to their first 45th District Championship win in five years. Her versatility and athleticism allows her to play nearly every position on the court and score in a variety of ways. Preston’s size is an advantage on the boards as well, as she led the Lady Admirals last season with 7.5 rebounds a game.

A high school athlete’s college decision can be a very stressful situation, but Preston is confident that she can excel as a Raider.

“Some key factors were the campus’ supportive community and coaches. The campus really felt like home. In addition to that, Coach Wethington’s style of coaching and play is very similar to my high school coach, Coach Mason,” said Preston.

Preston is grateful for the coaching and teaching she has received throughout high school but the most important thing to her is God.

“Overall, I thank God who gives me the strength and ability to play, but I want to thank my parents, I wouldn’t have been able to make it to this level without their support, they sacrificed so much for me,” said Preston.

Preston is also very thankful for her great coaching, both at Danville and Mercer County.

When I came into Danville my mentality towards the game was nowhere near where it is now. Coach Mason’s passion for the game rubbed off on me in a major way. My assistant coaches, Coach Ford, Coach Brian and Coach Hawkins have also helped me grow tremendously as a player. Out of all the things Coach Mason has done for me, the thing I appreciate most is her influence has taught me how to love the game of basketball,” said Preston.

Preston was a part of two state championships as a Lady Titan basketball player under Chris Souder, and she is thankful for his impact on her.

“Another coach that I was blessed to play under is Chris Souder. I learned more from him as an underclassmen than most players learn in their entire high school career. He believed in my ability and skill at a young age. I’m very grateful for the learning experience I got from him and his coaching staff,” said Preston.

The standout small forward would like one more season of making memories with the Admirals though, before she becomes a Raider. If Preston scores as many points as she did last season she will reach the 1,000 point club during her senior season. Preston is excited to get back to work with the Admirals, who are returning every player this season.

Back to back district championships are certainly appealing to Preston, but she is focused on the 12th Region Tournament.

“With all of our players coming back this year I’m looking at going farther in the region tournament,” said Preston. More than anything though, she wants to play her senior season.

All in all, Preston is astounded to have accomplished one of her many goals, and is excited to experience college basketball.

“I’m thrilled for the chance to play at the next level. It’s always been a goal in mind. I can’t wait to get on the court with Coach Wethington next fall and get the feel of college level basketball,” said Preston.