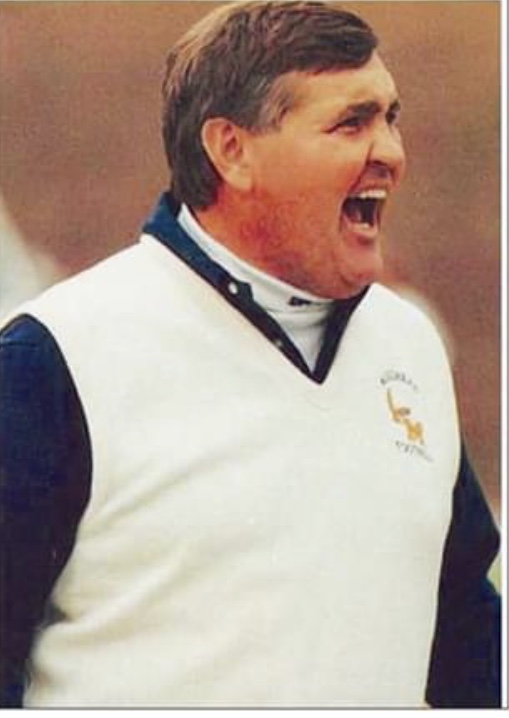 Bill Baldridge has spent his life attending to the needs of others. Whether working for the betterment of student athletes on the football field or mentoring young men without fathers for the Lexington Chapter of Team Focus, he has made a difference in the lives of many people, in Harrodsburg, and everywhere football has taken him.

When Baldridge was in middle school, he snuck under the fence to watch his hometown high school in Shelby, Ohio play football. As soon as he stood up on the other side of the fence, the head coach stopped him, Baldridge was scared.

“He said, ‘what are you doing?’ I said I’m coming to the game coach,” said Baldridge. The coach gave Baldridge a piece of paper and told him to use it to get into the game the right way and to come to see him once he was inside. “Oh gosh, what is he gonna do to me,” thought Baldridge. “I was worried, I went up to him and said coach, I’m sorry but I didn’t have any money. He told me ‘don’t worry about it you’ll never have to pay to get into another game cause you’re gonna work for me,'” said Baldridge. Baldridge went on to work for and play under legendary high school football coach Bill Wilkins who was later inducted into the National High School Football Hall of Fame. From the age of 13, Baldridge was learning how to call plays from some of the best high school football coaches in the country.

His high school coaching career began in Bath County where he helped a struggling program build its roots and regain its reputation. In his first season leading the Wildcats, Baldridge won coach of the year at the age of 24.

An impressive young coach such as Baldridge was an attractive hire for a small school with a lot of talent such as Harrodsburg High School, so he took the job. In 1970, Baldridge started the tradition of excellence that legendary Head Coach Alvis Johnson continued at Harrodsburg for 24 years after Baldrige’s departure.

Baldridge turned Harrodsburg into a powerhouse of class A football. During his first three seasons, Harrodsburg had a record of 29-5-1. The Pioneers went 10-1 in 1970, but failed to make the playoffs. In 1971, they made it to the state semifinals before losing to Trigg County, who later won the state championship. Following the 1972 season, Baldridge left Harrodsburg to take an assistant coaching position with the Georgetown College Tigers, but he returned to Harrodsburg the following season.

In 1970, Baldridge accompanied many of the Pioneer football players to a local revival at Pioneer Baptist Church in Harrodsburg. That revival was a remarkable moment in the lives of some of Baldridge’s players and some were later baptized because of it. Wayne Jackson, former Pioneer running back and Georgetown College football player, remembers that night as a defining moment in his life.

“It was a turning point in my life,” said Jackson, who has a lot of respect for Baldridge and his style of coaching. “One thing I remember about Coach Baldridge and actually all of my coaches is that I never once heard him cuss. It’s a simple thing, but 50 years later, it is something I will always remember about Coach Baldridge. That was important to me, not so much then but as I matured and coached little league football and had my own children play sports, it was important to me,” said Jackson.

Jackson also remembers Baldridge for his ability to see through the barriers of size when looking for a football player and instead discovering outstanding players by looking for “heart.”

“I was 5’6” and weighed 125 pounds and coach Baldridge gave me the opportunity to play football. He didn’t see me for my size, he saw me for my heart, he saw something in me that at the time I didn’t see in myself. Coach Baldridge has been and still is a great role model for me personally. He had a great influence on the person I was in high school and the person I am today, and I am blessed to have Coach Baldridge in my life,” said Jackson.

A fellow 1972 graduate and teammate of Jackson, Phil Yates, was a fullback and a defensive end for the pioneers, and will forever remember Baldridge for the compassion and care he had for his players.

“We knew that he cared for us not just because we were football players or athletes, he cared about us as young men and he helped develop us into men. We knew that, he not only said it, but we knew in his actions,” said Yates.

A deep respect is often made between coaches and players, and Baldridge excelled at having a profound impact on his players’ lives because he led by example, and showed that he cared by fostering the player’s needs as people, not just athletes.

“I remember one time he caught me smoking a cigarette at the drive-in. I had to run for a week after practice, but it hurt me more that I disappointed him, or let him down, because of the respect that we had for him,” said Yates.

In 1974 Baldridge and the Hogs still managed to miss out on the playoffs despite finishing 11-1. The Pioneers defense allowed only 26 points through the first six games and had five shutouts throughout the season. In the final game, they defeated Danville 33-32 in the CKC Bowl. Baldridge then left the program to Alvis Johnson and became an assistant coach at Morehead State University.

“The people, they were just good, they were good to us. We were just a young couple trying to figure out our way through married life and we moved to a new town, and everybody was just warm and welcoming and just made you feel like a part of the community immediately,” said Baldridge’s wife Janie.

After one season as an assistant at Morehead State where he coached former Pioneer Bo Yeast and future Super Bowl winning quarterback Phil Simms, Baldridge returned to high school football and led the Bellevue Tigers to two consecutive state championships in 1976-77 including a state championship win over Frankfort in 1977, the Tigers went 14-1 that season. After two years at Bellevue in which he coached 24 wins and five losses, Baldridge left to become an assistant coach at Murray State University where he coached one season before moving again, this time taking a head coaching position at Georgetown College.

Baldridge left the Tigers after one season and during the next three years, he was an associate head coach for the Cincinnati Bearcats in 1981 and 1982 and an assistant at Kansas University in 1983. In 1984 Baldridge became the head coach of the Morehead State Eagles, his first Divisions I head coaching job.

There, Baldridge became responsible for one of the biggest comeback victories in the history of college football. In 1986, the Morehead State Eagles were down 35-3 at the half to the Wichita State Shockers, and Janie Baldridge recalls praying during halftime. “We just said, ‘Lord don’t let them be humiliated when they come back out here, don’t let them (Wichita) score anymore’,” said Janie. The Eagles scored a remarkable 33 unanswered points in the second half, and won the game 36-35; the Shockers have not had a football program since that season.

During Baldridge’s time at Morehead State he was voted the Ohio Valley Conference coach of the year in 1986, and also appointed two future Super Bowl winning coaches to his staff, Mike Smith, former Atlanta Falcons head coach, and Jim Harbaugh coach of the Baltimore Ravens.

Baldridge returned to Harrodsburg in 2001 and continued his winning ways, going 8-4 and narrowly losing to Holy Cross in the second round of the state championship playoffs. During the 2002 season, Baldridge broke his leg while coaching. The injury, coupled with the rumors of Harrodsburg High School’s merger with Mercer County High School, convinced Baldridge that his time coaching at Harrodsburg was over.

After having coached in many different states and many different levels of football, Baldridge has developed a philosophy that motivates him to keep moving forward. “Don’t look back, I’m 76 and I don’t look back,” said Baldridge. Baldridge attributes his successes and trophies to God saying “my trophies belong to him, I know who gives me the power in what I’m doing.”

Now, Baldridge spends much of his time as a mentor to boys who have no father figure in their life. He says he wants to teach them that they do have a father, and that is God. The organization Team Focus aims to give guidance to young men and lead them in the right path for their future.

There is something about Harrodsburg that will hold a special place in Baldridge’s heart. He appreciates the tradition of Harrodsburg and the fort, as well as the people that made him feel at home while he was here.