A proposed $150-million solar facility took a tentative step towards becoming a reality last week. The Mercer County Joint Planning and Zoning Commission approved text amendments to the zon-ing ordinance which would allow solar farms as conditional uses in some agricultural zoning districts. 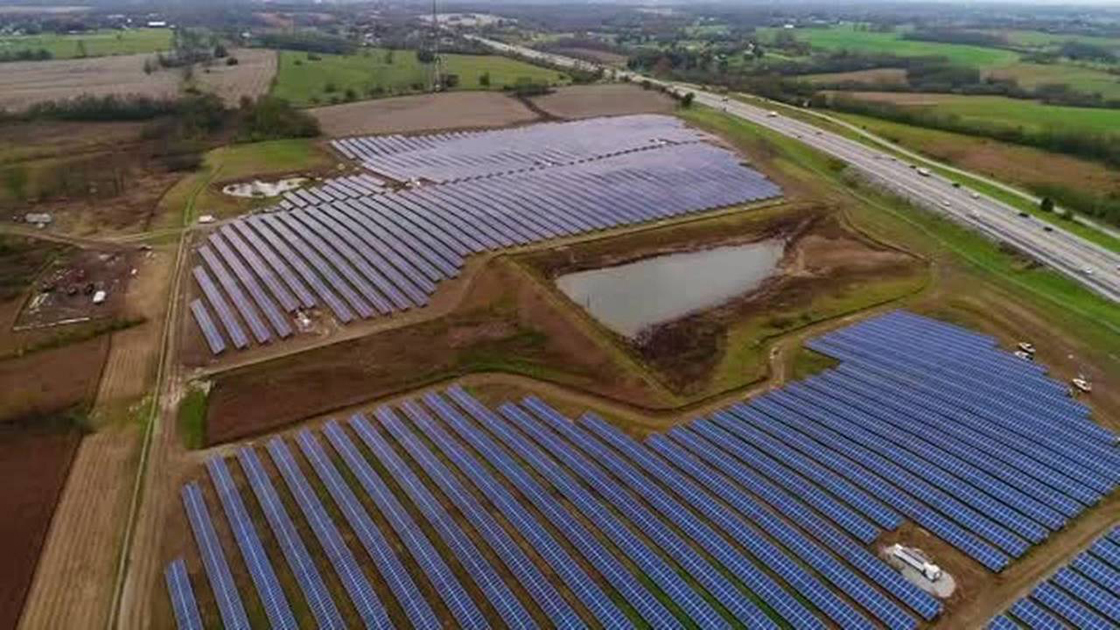 At the beginning of the public hearing, Adam Edelen of Edelen Ventures said the proposed 1,200 acre development would one of the largest projects of its kind in Kentucky and would put Mercer County on the map.

Once approved, the project would be located approximately 2.5 miles north of Harrodsburg on the west side of U.S. Route 127. The developer is Savion LLC, which is headquartered in Kansas City, Missouri. Savion is currently working on utility-scale solar energy project development in 24 states, including Kentucky.

Edelen said Savion is not a wildcat operation and is willing to work closely with the community. “It all starts with you,” Edelen said.

Drew Gibbons, senior development director and project manager at Savion, said they had been developing the project for three years. Gibbons said solar power is not currently an allowed use. The amendment being considered would allow the county to consider projects on a case by case basis.

“This specific site sits adjacent to a high capacity voltage line,” said Gibbons, who said there are no significant environmental issues with using the site.

The project would be built in two phases, he said. Once constructed, the facility would have a 35 year life span.

Gibbons was asked about the nearby Springlake subdivision. He said most residences are about 500 feet away, the closest two are about 450 feet. He said Savion would meet with residents from around 35 homes on Wednesday in the first of a series of meetings.

Savion is creating simulations for the view from 127 and Jackson Pike, which would intersect the solar farm. Gibbons said it would be hard for motorists to see the panels from the road.

Gibbons was asked about taxation. He said the solar farm’s owner would make payments in lieu of taxes to the county and school, but the site would no longer be assessed as a property on the county rolls. It would be up to the schools and the county to negotiate that payment. He said the revenue is worth having the project in the community. Gibbons said it could generate at least $100,000 a year and up to $5 million over 20 years.

He said solar projects are different than natural gas projects, which are built on spec. Gibbons said solar farms don’t get built unless a utility agrees to purchase the property or there is a long term agreement to buy the power.

“It would typically be the utility that owns the line,” Gibbon said. Under a second scenario, a bank would own the location while a utility or corporation would agree to buy the power over a period of time.

Gibbons was asked about property values. He said the proposed location was surrounded by a significant amount of agricultural land. He said the developer would do what they could to mediate the visual impact through screening or vegetation. He said there is no study that shows damage to nearby property values. The plant has no emissions and would generate little traffic once completed.

Asked what would happen with the solar panels at end of the project’s life, Gibbons said the contract requires the panels to be decommissioned and the soil to be returned to the same condition as before construction.

He was also asked about the possible impact on wildlife.

He said Savion has performed significant environmental surveys, including for endangered wildlife. Gibbons said they have not done a glare study because they would only be required if the project was within a mile of an airport. He said they could perform such a study before applying for the conditional use permit, if the amendment passed.

Gibbons said he understood the concerns expressed at the public hearing, but he called the solar facility “a pretty bankable asset.”

Shawn Moore, executive director of planning and zoning, noted that the Mer-cer County Fiscal Court will vote to change the ordinance, while the planning and zoning commission only makes the recommendation. He said the solar farm would have to go before the board of adjustments and another public hearing would be held. In addition, property owners would all be informed and allowed to voice their opinion.

Moore said he had fielded multiple requests from energy companies. He advised the commission to recommend approval of the proposed text amendments with an edit that would include A-2 and A-3 zoning districts but would restrict R-1 districts that are currently undeveloped and immediately adjacent to an agricultural zoning district.

Chairman Adam Johnson asked for a motion on the proposed text amendment. Board member Jim McGlone said it was a lot to comprehend. McGlone said he wanted to continue the public hearing until they had held the met with property owners.

“I think you’re going to get a lot more input,” he said. He moved to table the text amendment for 30 days, with board member Mike Harden seconding the motion.

“There is no such legal framework that supports the conversation you’re asking us to have,” he said. “I would encourage you to trust the process.”

“We need more information,” Harden said. “I don’t know how you guys are regulated.”

The motion to table for 30 days ended with a tie vote, with members Jonathan Elliott, Tom Hardy and Johnson voting against it and Harden, McGlone and Daarik Gray voting for it.

Johnson asked for another motion. Elliott moved to approve the text amendment with Hardy seconding the motion.

Elliott said he is concerned about the visual impact and the economic impact, but unless they approved the text amendment, they would be unable to learn more.

“We’ve got to move forward a little bit to have the discussion,” he said.

Moore said green energy is the nation’s future. He said it isn’t a wind farm, where the noise would bother residents. Moore said the KU solar facility in Burgin could not be seen from nearby Hardin Heights because it had been screened well.

He said it would be up to the board of adjustments to discuss screening and vegetation.

“If you table this for a month and you come back no closer than today, you’ve burned two months of time,” Moore said.

Harden said he wanted to know the downside of solar farms.

“It’s illogical to turn it down,” Hardy said. “Why not allow the project to come forward?”

The second motion passed, with only Gray voting against. The Mercer County Fiscal Court will make the final decision on the amendment.

Everyone but the board left for the second public hearing, to consider public comment on chapters 1-5 of the 2020 Harrodsburg-Mercer County Comprehensive Plan. The amended chapters were passed unanimously.

The next meeting of the Mercer County Joint Planning and Zoning Commission will be on Tuesday, Aug. 11, at 5:30 p.m.