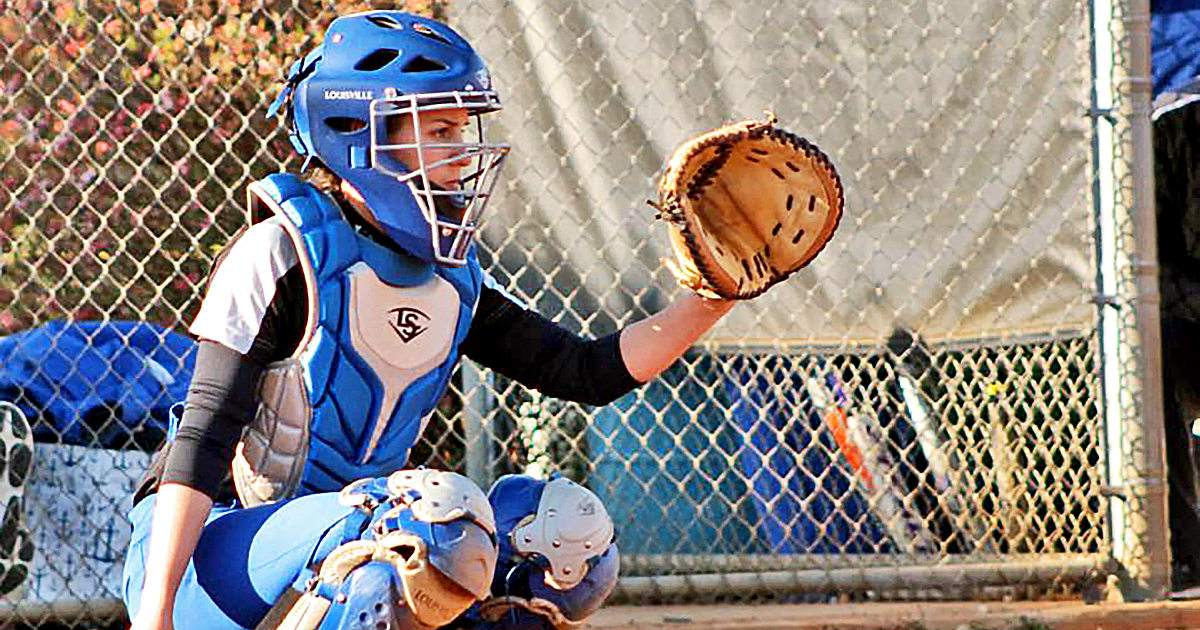 (Photo: Elisabeth Thomas) Danville senior Abby Thomas hopes for a chance to show off her catching skills this season.

(Editors note: Unfortunately, the current season is suspended for all teams in the state of Kentucky. However, we here at The Harrodsburg Herald felt it was only right to give the teams their season preview, especially highlighting the seniors for all their work.)

When Danville steps on the field for its home opener on March 18 against Model, they will be making history.

The Lady Ads have not had a field to call their own in the programs existence and that changes this year. They are hoping that it’s just a sign of the incremental growth they’re hoping to achieve in this season.

“It’ll be surreal. Our first home game is going to be really cool,” junior catcher Faith Breitenbach added. “Just knowing we have a place to call home.”

That stadium has been years in the making and is the culmination of Danville’s struggle to find some consistency in the softball program.

“Ever since my sister played softball in 2013, we’ve been pithing for a new field and we’ve finally got one,” Faith said. “I think that’ll add to the push to make this season really great. We have a place to call our own.”

“It’s huge. It’s been about 18 years in the making,” coach Breitenbach said. “Last time I coached with coach (Jerry) Perry, they did some renovation on the Jackson Park field. It was a nice field, but it just wasn’t ours. It’s nice to be able to call this field ours. And it’s beautiful.”

But the field isn’t the only added consistency for Danville.

The Admirals have had several coaches over the last few years, and while coach Breitenbach is only in his second season, he’s committed to seeing this thing through.

“I want to stick with the pro
gram. I’m close to retirement as a teacher but I want to stick around and try to build something here in the softball program,” he said.

His daughter and leadoff hitter is excited to have some more stability at the coaching position.

“I think it’s a big thing, having a constant coach. I’m hoping that will work well for us,” she said. “We’ve been playing together for a long time now and I feel like our chemistry is really good. I think we’re able to work together really well. I’m just excited.”

And there’s stability on the roster too.

Last year’s team lost three seniors, but most of the starting line-up remains in tact. The growth of pitchers Ella Dampier and Anna Swann is also something that Breitenbach is encouraged by.

But there is some shuffling around. Faith Breitenbach and Abby Thomas will switch positions this year, with Thomas moving from catcher to shortstop and Breitenbach moving from the six to behind the dish.

“I’ve caught before in middle school and some freshman year. Going into this season, I knew I might play a different spot so I was open to whatever was going to happen,” Breitenbach said about the move. “Earlier Abby had some injuries that prevented her from catching so we kind of switched positions then, too.”

But coach Breitenbach looks at what’s coming back and is excited about the team he has.

“Faith has led the team in hitting the last two years. Amiyah Crawford, our third baseman, is our clean-up hitter. The two freshmen in the outfield — Sammy Bottoms and Katie Jones both started last year,” he said. “Abby Thomas can hit and is so versatile. She can play pretty much anywhere. With more pitching — last year we mainly used one pitcher and she really didn’t have much velocity, relied more on the offspeed. I feel confident with a lot of our players coming back with more and improved pitching. I think our win total will go up.”

How much will it go up? Well, coach Breitenbach thinks they have the potential to triple their win total from last year.

“I’d like to be a .500 team this year. Last year, we won five games. I’d like to get to 15 wins and I think that’s doable,” he said. “With the nucleus of last year’s team coming back. I’ve heard from the district coaches saying how they were impressed with how things were going with our team.”