Officials Still Looking For Cause Of Lung Injuries 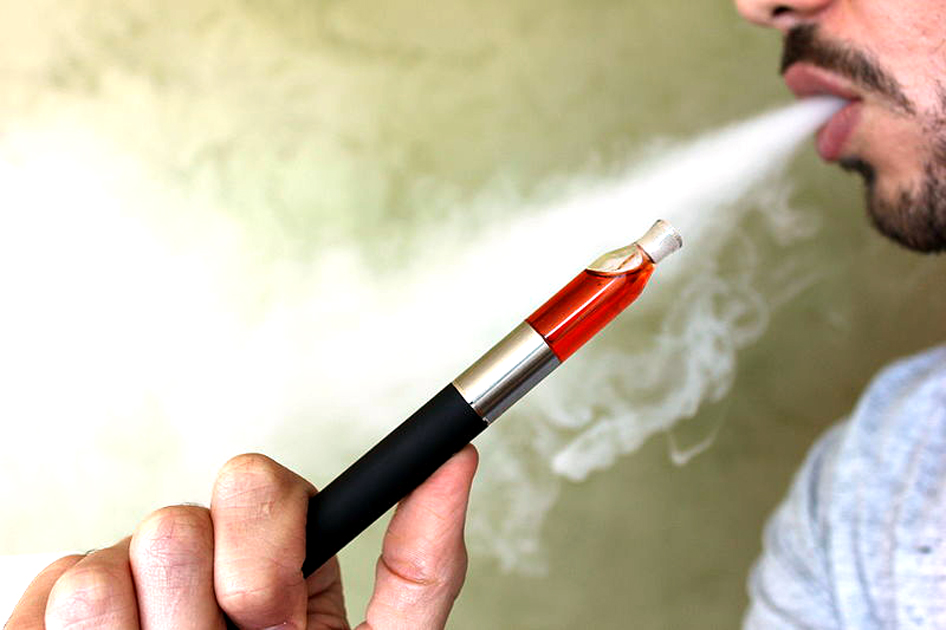 While vaping is marketed as a way to quit smoking, Emily Steer of the Mercer County Health Department is dubious. “I haven’t met anyone who tried to quit smoking by vaping who succeeded in quitting vaping,” Steer said. “Most of them either went back to smoking or they do both.” Image courtesy ecigarettereviewed.com. accessed by wikimedia commons.

The federal government is expected to announce next week a decision to take off the market all e-cigarettes except those that taste like tobacco and menthol, according to the Wall Street Journal.

While the decision is aimed at halting the rise in  vaping among teenagers, menthol vaping products would still be allowed, according to the report.

The proposed federal ban of flavored juices has been met with criticism from vaping advocates, including manufacturers and the owner of shops where vaping products are sold. Some have tried to shift the blame from vaping products to Tetrahydrocannabinol (THC), the principal psychoactive constituent of cannabis.

Health officials have been reluctant to blame THC because, while it has been present in most of the samples tested to date, it does not account for all the injuries that have been reported. According to the CDC, “the only commonality among all cases is that patients report the use of e-cigarette, or vaping, products.”

At the same time, THC use has been associated with a wide range of health effects, particularly with prolonged heavy use. The CDC recommends that anyone with marijuana use disorder should seek evidence-based treatment by a health care provider.

For anti-smoking advocates, the current controversy around vaping evokes a strong sense of deja vu.

Lung cancer was relatively unknown until the rise of cigarette smoking during World War I. As cigarette smoking grew more popular, so did the prevalence of lung cancer, until, by the early 1950s it was “the most common cancer diagnosed in American men” according to the American Cancer Society.

Steer, who has led smoking cessation classes at the health department for years, said she’s never seen anyone actually quit smoking by switching to e-cigarettes.

“I haven’t met anyone who tried to quit smoking by vaping who succeeded in quitting vaping,” Steer said. “Most of them either went back to smoking or they do both.”

For years, Steer worked with anti-smoking groups such as Teens Against Tobacco Use to ban smoking in public areas such as school campuses. Today, she said she finds people vaping in no smoking areas.

When vaping came out in 2007, Steer said she was hopeful it would be a tool in helping people quit. But vaping has not turned out to be that tool. Many users have no idea how much nicotine they’re consuming. A Juul pod is the equivalent of a pack of cigarettes, according to the company’s website.

It is especially galling that defenders say vaping saves lives.

“No professional medical association of any kind—none—has said that e-cigarettes of any kind is safer.,” said Angela Brumley-Shelton, a tobacco treatment specialist adjunct instructor with the University of Kentucky College of Public Health. “They are not FDA-approved, so you do not knows what’s in them.”

Last year, Altria, the owner of Philip Morris, bought into vaping in a big way, paying $12.8 billion to purchase Juul, the largest maker of vaping products. Last week, as a rising tide of bad news has rocked the company—a former employee has sued Juul, alleging that Juul knowingly sold contaminated pods—Altria announced they were writing off $4.5-billion of their initial investment. Juul has also announced they are laying off 10-percent of their workforce.

At the same time, Altria is looking to stake out territory in the burgeoning cannabis industry. In December of last year, they purchased a 45-percent stake in Cronos Holdings for $1.8 billion. On its website, Cronos boasts having  international production and distribution across five continents.

Meanwhile, officials are still trying to determine the cause of the lung injuries. The CDC recommends that people should not:

• Buy any type of e-cigarette, or vaping, products, particularly those containing THC, off the street.

• Modify or add any substances to e-cigarette, or vaping, products.

The CDC also recommends that anyone vaping to quit smoking should not return to smoking cigarettes.