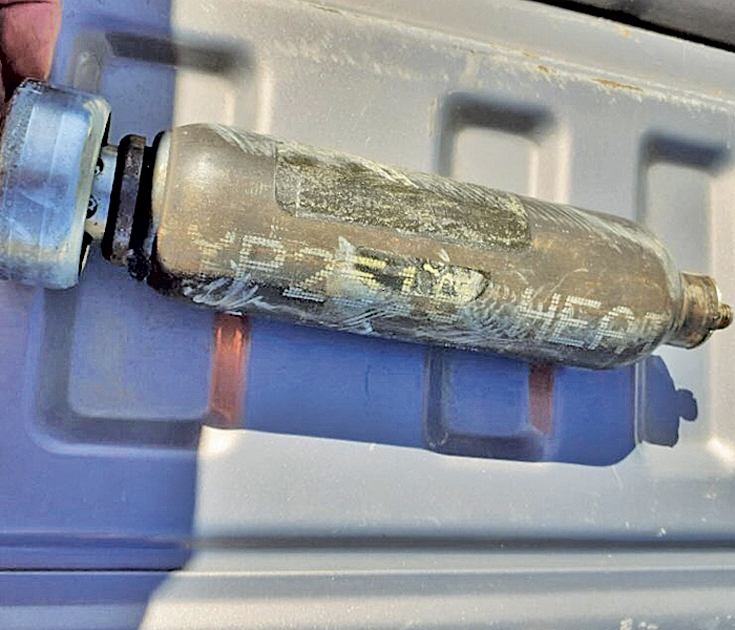 The Mercer County Sheriff’s Office is asking for the public’s help in identifying this object, which was found lodged in the side of a mobile home Sunday. Image: Nick Oliver, WKYT.

A Burgin man found an unidentified flying object at his home Sunday.

This UFO is not alien in origin. There is English writing on the side. But how it got lodged in the wall of a house is still a mystery, and officials are asking for the public’s help.

The Mercer County  Sheriff’s Office is asking for help in identifying the object.They’d also like to know how it got there.

The UFO was first noticed Sunday night when Tommy Woosley returned to the mobile home he rents on Buster Pike.

Woosley noticed the metallic object—which appears to be some sort of pressurized cylinder—jutting from the wall.

He told WKYT the object damaged his bathroom. Woosley told the police he believed the object fell from a plane, but officials don’t know how it got there.

The investigating officer, Dep. Bill Cruce, forwarded pictures to the Federal Aviation Administration but they have not identified the UFO so far.

“At this point, we have no idea what the object is or where it came from,” Cruce told the Harrodsburg Herald.

It is not unknown for parts to fall off airplanes.

According to Air and Space Magazine, it happens often enough to have its own acronym in the aviation safety community: TFOA, or Things Falling Off Aircraft.

However, TFOAs rarely hit homes, and it is almost unheard of for a person to be struck by something that has dropped from a plane, according to Air and Space Magazine.

The investigation continues. Anyone with information can call the sheriff’s office at 734-4221.