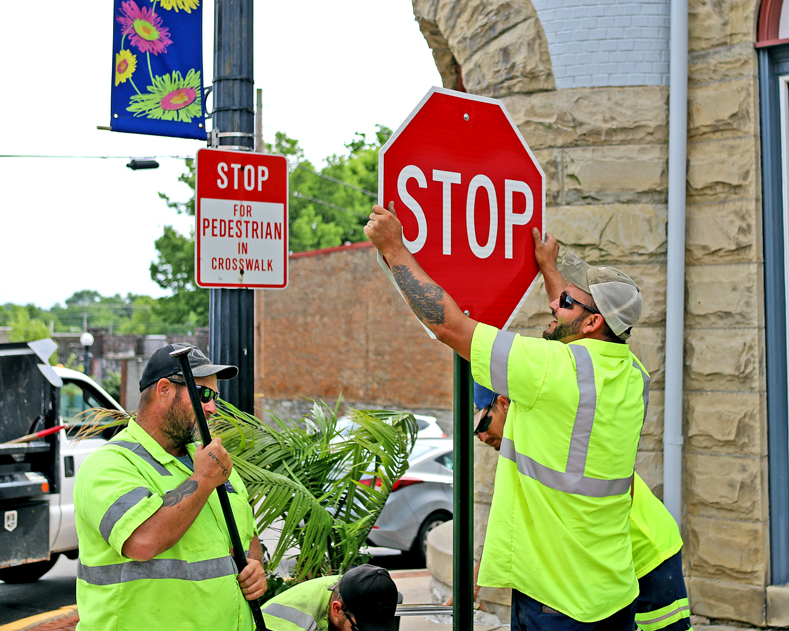 Workers with the City of Harrodsburg’s public works department are creating two new four-way stops on Main Street, at the Poplar and Office Street intersections. The City Commission voted to create the stops as a way of slowing downtown traffic.

The city commission voted the night before to create two four-way stops at the Office Street and Poplar Street intersections on Main Street. They also voted to erect a stop sign at the corner of Greenville Street and Beaumont Avenue.

The reason behind the stops is protecting pedestrians by slowing traffic moving through the downtown business district.

While in the past merchants have opposed placing stop signs in the downtown area, Tim Kazimer, who co-owns the Kentucky Fudge Company with his wife Jennifer, said he had a petition signed by all local merchants or their representatives saying they were in favor of the idea.

Another issue cited by Kazimer and the commissioners is that cars coming from side streets cannot see without pulling out onto Main Street, especially when cars were parked along the street.

Commissioner Charlie Mattingly said it would be at least two weeks before they could also paint the intersections. The commissioners also discussed erecting stop lights at the new four-way stops, but nothing has been decided.