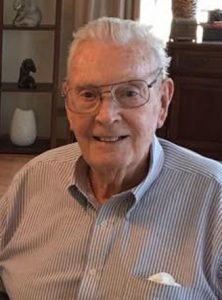 Bill was born in Shakertown, on April 7, 1924. He was the son of Romie and Annie Russell.

One of six children, he lived on a farm in Shakertown where the family raised tobacco and corn before moving to Harrodsburg. At age 19, he joined the United States Army, where he served for 11 years. He was stationed in Guadalcanal, the Philippines and Germany, ending his military career in Fort Meade, Md., as a cook for two four-star generals.

While in the service, he married Virginia Carey on June 25, 1946, and together they had four children, Ron, Candace, Melanie and Billy.

A member of Harrodsburg Baptist Church, Bill was an active volunteer and cook best remembered for preparing the Wednesday night Fellowship Dinners.

After Virginia’s passing, Bill married Elizabeth Harmon Durham on October 15, 1965, and the family grew with the addition of her two daughters, Karen and Barbara.

Bill enjoyed deer hunting, gardening, buying and refurbishing cars and trailers, and camping with the family. Upon Bill’s retirement, he and Elizabeth relocated to Ellenton, Fla., where they were active members of Emmanuel Baptist Church and they enjoyed traveling, card games with friends, yard sales, and buying and selling recreational vehicles.

Bill and Elizabeth were blessed to celebrate their 50th anniversary in Florida before Elizabeth’s passing.

He was preceded in death by his first wife of 18 years, Virginia; wife of 51 years, Elizabeth; son, Billy Russell; parents, Romie and Annie Russell; brothers B. H. and Con Russell; and sisters, Stella Proctor, Katie Baker, and Sally Carey.

A memorial service celebrating his life will be held at 11 a.m. on Friday, Jan. 11, 2019, at Sun City Christian Center, Wimauma, Fla., with interment of ashes and a graveside service in Harrodsburg, at a later date.