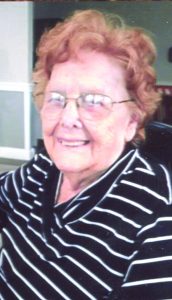 Born May 6, 1923, in Evarts she was the daughter of the late Alexander Vanover and Nancy Browning Vanover.

Emily was preceded in death by her husband, Virgil Gibson.

The funeral service will be held Friday, Dec. 21, at 2 p.m. at Evergreen Funeral Home Dignity Chapel. Burial will be in Louisville Memorial Garden’s West.

The family would like to give thanks to the caregivers at Louisville East Nursing Home for their outstanding support and care given to Mrs. Gibson.