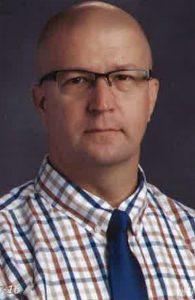 Casey Reed Sparrow, 47, of Harrodsburg, husband of 23 years to Lisa Cox Sparrow, died Saturday, Nov. 3, at his home in Harrodsburg.

Casey was born in Lexington, Jan. 15, 1971, to Roger Clay and Susan (Lewis) Sparrow. Casey grew up in Larue County where he went through the Magnolia Elementary and Larue County school system through his sophomore year. The family moved to Frankfort where he graduated from Franklin County High School in 1989.

He went to Taylor University and graduated in 1994 with a BA in Elementary and Middle School Education with an emphasis in science. While there, Casey played football all four years and was named second team NAIA All American, he ranked in the top six in school history for most receiving yards, most receiving touchdowns, most receiving yards in a single season and career. In 1994, after his senior season at Taylor University, he was invited to the NFL Combine and was worked out by the Dolphins, Steelers and Packers. While at Taylor, Casey also ran track and was ranked top in the NAIA in the 100, 200 and 400 and Sprint relays. He went on to earn his Masters from Eastern Kentucky University in School Administration and his Rank One in Director of Pupil Personnel and Superintendency.

Casey had a passion for sports and young people, which made him a great coach at the middle and high school levels for 18 years. He was former head girls basketball coach and boys and girls track coach at Anderson County, Scott County and King Middle School assistant boys basketball coach. He was the quarterback coach and co-offensive coordinator for Covington Holmes High School. He and his wife, Lisa, were co-coaches for the Lady Bulldog Basketball program, where they were the 2002 35th District Champions, the 9th Region Champions and reached the final four of the KHSAA State Tournament with a 30-6 record. They had the honor of coaching the 2002 KY’s Miss Basketball and were named the 9th Region Co-Coaches of the Year and the NKY Enquirer Coaches of the Year, and inducted into the Greater Cincinnati Basketball Hall of Fame. They were also named 2003 9th Region Coaches of the year.

Casey was preceded in death by his paternal grandmother, Cordelia Sparrow and maternal grandparents, Charles and Saragarnett Lewis.

Visitation was 4-8 p.m. Monday, Nov. 5, at The Carpenter’s Christian Church.

Craig McMann and Jay Stratton lead the funeral services Tuesday, Nov. 6, at the Western Hills High School. Burial was in the Spring Hill Cemetery, Harrodsburg. The Ransdell Funeral Chapel was in charge of arrangements.