Beating a team three times in a season is tough, but the Mercer County Titans (6-10-2) accomplished that feat, defeating the East Jessamine Jaguars (4-9) by a final score of 10-2 on Monday, Oct. 8, in the first round of the 46th District Tournament at Mercer County Senior High School.

Seniors Andrew Turpin and Marcus Lewis both earned hat tricks against the Jaguars.

Turpin, who has owned the Jaguars this season, scored his eighth goal against them this season and his second hat trick.

Junior Hunter Booth, freshman John Beaven and senior Johnny Johnston scored one goal each to round out the scoring for the Titans.

Mercer County had an 8-0 lead before East was able to add on two goals late in the game.

“I was a little worried coming into this one because we’ve only played one game in the last two weeks,” said Head Coach Doug McClain.”I think we just came ready to play today. I was pleased with our attack at the beginning of the game, trying to spread East out and it worked. We needed to play disciplined and we did until the end when it got a little sloppy. But we came in, and set the tone and had fun out there.”

Turpin scored the first goal of the match off a beautiful cross by Booth at the seven-minute mark.

Booth got in on the scoring act, scoring the third goal of the game off an assist from Turpin.

Turpin added another late first half goal from the top of the box and the Titans held a comfortable 4-0 lead at halftime.

Senior Sam Warren started in goal, only to be replaced by sophomore Aiden West midway through the first half. Despite being taken out, Warren started the second half and played the rest of the way.

“We talk all the time that if he would’ve committed to soccer earlier, he could’ve been very good at that position,” said McClain. “He made some good saves for us tonight. For a big guy, he’s got really good footwork and I think football helps a lot with that.”

Warren is also a starting lineman on the Titan football team.

It didn’t take long for Mercer to score in the second half.

Turpin scored minutes late on a nice flick inside the box to earn his hat trick and give Mercer a 6-0 lead with 30 minutes to play.

Lewis added to the onslaught just minutes later for his second goal of the match and added his hat trick a few moments later to make it 8-0.

The Titans dominated in every aspect of the game, putting East in positions they weren’t comfortable in all night long.

The Titans defeated East for the third time this season and look to avenge two losses to West Jessamine earlier this season in the 46th District title game on Wednesday, Oct. 10, 7 p.m., at home.

“We haven’t played them (West) healthy yet. We got healthy and now we’re not healthy again,” said McClain.

Senior defender Kola Raskin went down hard in the second half and did not return. Raskin is a strong defender and will be missed if he is not able to play the rest of the season.

“We just have to come out and be disciplined and be ready to play,” said McClain. “We’re going to try to do the best we can. West is a really good team, one of the top teams in the region so we’ll have our work cut out for us.” 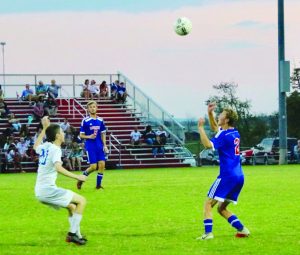 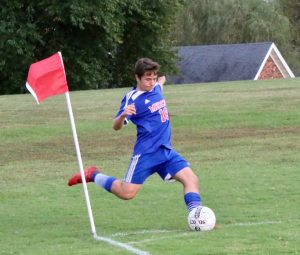 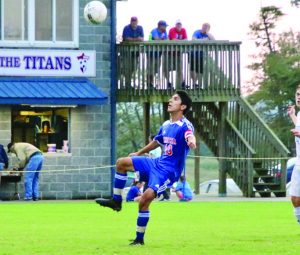 Angelo Ontiveros handles the ball at midfield against East Jessamine.