East freshman Lilly Glushschak scored four straight points on her serve and Mercer Head Coach Lynn Flach called a timeout to settle her team. Mercer struggled communicating with each other and East was quick to take advantage.

Mercer won their first point off a double hit by East and freshman Haven Six stepped behind the line to take the first serve for Mercer. Six only scored one, losing the serve when Mercer left the angle open for an East spike. Mercer learned from the mistake and did a better job defending at the net and covering the floor.

Mercer and East both battled back and forth from the service line and at the net. Six had a beautiful set to Hannah Blevins who crushed it for the kill. Blevins’ served earned Mercer a few more points, taking the first lead of the game, 12-11.

West won the serve back but junior Jaclyn Devine made her presence known with a hard hit spike East had no answer for. After showing her strength, Devine also showed her finesse as she strategically placed a dink over the net and caught East sleeping.

East won the serve back and Glushschak earned three  points forcing Coach Flach to take another time out when East jumped out 17-13. The timeout worked and Glushschak served into the net giving Mercer back the ball.

Again, Mercer and East traded serve for serve and Mercer had a key net call that put East within striking distance at 23-18. East then earned their own call at the net and Mercer regained the serve and a chance to come back on East who was leading the game 24-19. However, the lack of communication Mercer started the game with sealed their fate as they let the ball fall between them, ending the first game 25-19.

“We couldn’t get in our rhythm and didn’t communicate well,” said Flach.

Six started the second set for Mercer putting one on the board. East took the early lead 4-3 until Devine won the serve back with smart ball placement. She then followed up with a strong serve  but Mercer was unable to keep the serve and score was tied 5-5.

Players for both teams showed their skill working their position as hits were dug out, passes made their way to the setter and hitters took advantage of well placed sets.

Mercer couldn’t quite capture the lead. Salena Cox had a strong block at the net to put Devine back at the service line but Mercer was unable to capitalize on the momentum, trailing East 16-13.

“Volleyball is a game where you have to play smart and tonight we didn’t play smart like we know how to do,” said Flach.

Once East jumped out 18-15, Flach took another timeout to settle her team. Out of the timeout, Blevins made a smart placement at the net to regain the serve, but again Mercer couldn’t turn it into the points they needed.

Trailing 22-19, Six’s serve barely skims over the net to earn her team the point and Blevins then sets up Devine for a kill. Mercer’s run was cut short when they lost the serve.

Glushschak was back at the service line for East and scored one for her team, Mercer then dropped the second set 25-21 when a hit by East that looked to be going wide fell on the line.

Devine opened the third game with a kill, but it was still back and forth between the teams until Lady Jaguar Emily Day earned four straight giving East the lead 6-2.

Mercer was able to etch away at East’s lead, making the most out of East’s mistakes. Maddie Nichols served two points to bring Mercer within one, 7-6.

The teams traded serves and hits. Devine dinked one over the net and East’s front line got tangled up and Mercer closed the gap at 12-11. Brinkley Prewitt showed some hustle to save a wide passed ball to get it across the net right inside the poll to tie the game 12-12.

Still, Mercer couldn’t keep the momentum on their side. Each team would take turns taking the lead until East’s Hallie Stafford hit the service line. Mercer couldn’t break Stafford’s serve and she ended Mercer’s season, 25-16.

“Tonight was disappointing because we didn’t play well,” said Flach. “Though the season didn’t end how she had hoped, Flach had high praises for her team. “These are all a good group of girls. There is no drama and they are very team oriented and have been so much fun to coach.” 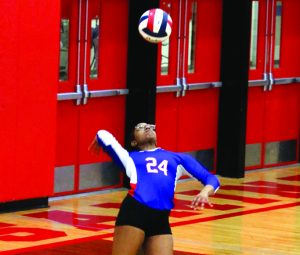 Senior Tamara Bartleson serves the ball against East Jessamine on Monday, Oct. 8. The Lady Jaguars defeated the Lady Titans in the first round of the 46th District Tournament. 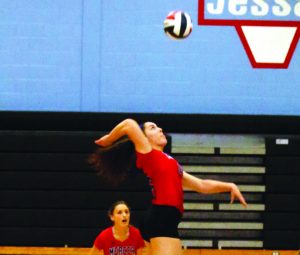 Junior Jaclyn Devine goes for the kill against East Jessamine in the first round of the 46th District Tournament on Monday, Oct. 8. 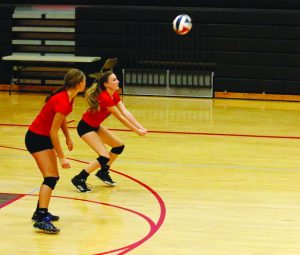 Junior Brinkley Prewitt (right) sets up for a dig against East Jessamine in the 46th District Tournament on Monday, Oct. 8.