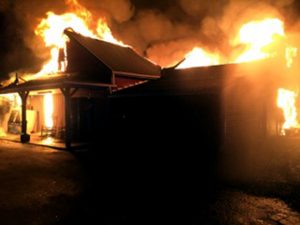 KSP investigators are treating the fire that consumed the Rose Hill Food Basket as an arson. Photo provided by KSP.

According to a KSP press release, the first call to 911 was reported just after 3 a.m., and when the fire department arrived the structure was fully engulfed.

The initial investigation indicates someone allegedly set the building on fire, and this was the second time that a fire was reported at the store in the past three weeks., according to the KSP.

The Arson Task Force is offering up to a $1,000 reward for information leading to the arrest and conviction of the person(s) responsible for starting the fire.

The ongoing investigation is being conducted by KSP Post 7 Arson Investigator Pat Alford.