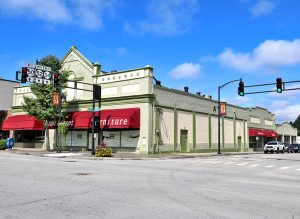 While residents have been upset about the closing of several local businesses, Harrodsburg is not the only city being impacted by the ongoing retail apocalypse. The former home of Main Street Furniture in Danville has sat empty for over a year. “It’s not just us being affected,” said Mike Willand, executive director of the Harrodsburg-Mercer County Industrial Development Authority.

The Harrodsburg City Commission is creating a position for an economic development director. The commission gave first reading to an ordinance creating the position at their meeting Monday night.

Commissioner Scott Moseley, who chaired the meeting, said the move comes out of recent discussions on economic growth in Harrodsburg. Moseley said the economic development director would work with other agencies, in particular the Harrodsburg-Mercer County Industrial Development Authority, on business retention as well as attracting new businesses to the community. He said the industrial development authority would focus on larger businesses and industry while the economic development director would work on attracting smaller businesses.

That will be good news to Mike Willand, the executive director of the industrial development authority.

Last month, Willand told the authority’s board of directors it is “going to take a team” to draw new businesses to the community.

The directors have talked in the past about creating a business expansion and retention program, but Willand said there is a limit to what the agency can achieve alone.

“We have a small budget, $75,000, one part-time employee and no staff,” Willand said. “We have limited resources.”

Development has been a hot topic over the last several months, with the closing of several local businesses. The decline seems to fly in the face of current economic trends. However, Willand said most economic growth is in urban areas like Cincinnati, Louisville and Lexington, not in rural areas like Mercer County. “It’s not as spread out as it used to be,” he said.

Part of that is uneven job growth in rural and urban areas. While the national unemployment rate has dropped to 3.7 percent, the USDA has estimated that the unemployment rate would be 7.8 percent in rural areas if workforce participation was the same as in 2010. In rural areas across the nation, the number of jobs hasn’t returned to levels recorded before the beginning of the Great Recession and, according to federal data, the number of job opportunities has dropped in two of the last five years.

Then there is uneven economic growth between industries. Even though the United States recorded a 4.2 percent growth rate for the last fiscal quarter, there is an ongoing retail apocalypse, Willand said.

In 2017, major retailers closed over 5,000 stores, according to Clark Howard’s website, clark.com. This year, Toys’R’Us went under while other established retailers, such as Sears and J.C. Penney’s, are still closing stores. While Amazon.com and other online retailers are getting most of the blame, another cause of the retail collapse is over construction of stores. A 2017 analysis performed by the investment bank Credit Suisse found the U.S. has 23.6 square feet of retail space per person, nearly twice the amount of other developed nations. That means, roughly, that there is an Apple Store Genius Bar for every man, woman and child in the nation.

While many Mercer residents point to Danville as a role model, that city has also been impacted by some of the recent negative economic developments. Main Street Furniture in Danville has sat vacant since going out of business in November 2017. Cue on Main Street has also sat empty for over a year since the owner closed down the restaurant.

“It’s not just us being affected,” Willand said.

He said the key to making Mercer County more attractive to new businesses is to make the community more attractive in general. While companies are looking for a skilled workforce and local infrastructure, they are also looking at the quality of local schools and housing and, perhaps most importantly, what Willand called a “welcoming climate.” That means being open to new ideas and new people.

“It’s not just about economic development,” he said. “It’s about improving quality of life.”

The next meeting of the Harrodsburg City Commission will be Monday, Oct. 22, at 7 p.m.