It wasn’t the ending the Mercer County Lady Titans (10-7) soccer team was hoping for. They were  defeated in extra time on Tuesday, Oct. 9 by a late Jenna Dickinson goal in the first half of extra time to propel the Lady Jaguars (6-11) to a 2-1 win and to the 46th District championship game against the back-to-back state champion, West Jessamine Colts tomorrow at 7 p.m.

After starting the season 7-2 after nine games, the Lady Titans went 3-6 in their last nine, including their last two losses of the season to the Lady Jaguars in a span of six days.

After a scoreless 54 minutes, Ashlyn McHolan’s goal with 25 minutes left gave East a late lead. McHolan dribbled the ball inside the box, to the left of the goal and kicked it over freshman goalkeeper Chase Flach’s head into the back of the net.

The Lady Titans answered five minutes later on a screamer by senior Kaley Woods outside the top of the box to tie the game.

Both teams were able to defend until the final whistle of regular time.

It didn’t take long for East to end the game. Three minutes into the first five-minute half of extra time, Dickinson scorched a shot by Flach and the Lady Jaguars celebrated as they sent the Lady Titans home for the 2018 season.

It’s not how the Lady Titan seniors wanted to end their careers. After making a surprise run to the region championship last season, they had high hopes for 2018, but it didn’t work out the way they had hoped.

“I’ve only had this group of seniors for three years and I just wanted to thank them for all the time that they’ve put in because I push them pretty hard with conditioning and scheduling,” said Culver. “I just wanted to thank them for everything that they’ve done for this program and our school. They’ve done every single thing that I’ve asked them to do, and that’s all you can ask for as a coach. At the end of the day, have they done everything that you’ve ever asked of them? If they’ve done that, learned from that and gotten some life skills along the way, then we’ve done our jobs as coaches.”

The Lady Titans fell to Madison Central 5-4 on Saturday, Sept. 22, but they lost more than just the match. One of their best young players and midfielders, sophomore Abby Dean went down with a broken collarbone and it threw the Lady Titans off rhythm heading into the final stretch of the season.

“When Abby (Dean) went down out of the midfield, it hurt us. She’s such a good player in the middle and she’s able to makes things happen in the midfield with the give-and-go, communication and her touch. Each player has their skills, and it’s hard to replace an Abby Dean. Nobody plays the way she does,” said Culver. “Lyzzi (Prigmore) is Lyzzi and you can do all down the list. It’s hard to replace players like that. Losing Abby in the midfield did throw us off a little. But, we are a young team. We’ve got a bunch of freshman and sophomores stepping up out there and trying to play at a high level.”

Culver gave credit where credit is due. 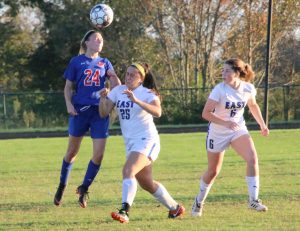 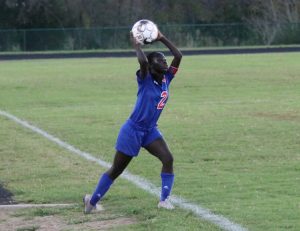 Abby Steele throws the ball in against the Lady Jaguars. 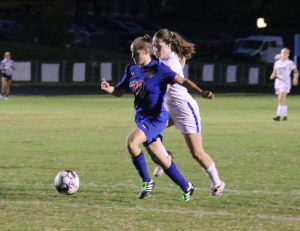 Kaley Woods breaks away to the goal. 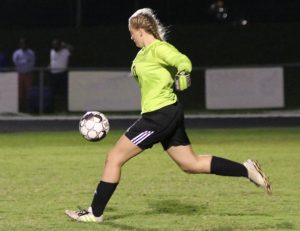 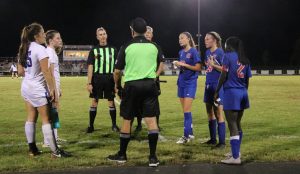 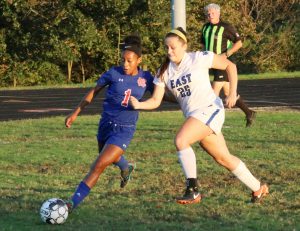 Love Mays (1) fights for the ball in the box. 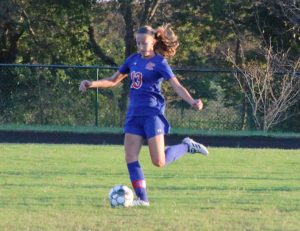 Lyzzi Prigmore possesses the ball at midfield and looks for an open teammate.