Burgin volleyball ended their season Monday night, Oct. 8, with a loss to West Jessamine in the first round of district play.

West Jessamine’s Caitie Hampton started the game serving, scoring 10 in a row. Burgin was able to return the ball, but struggled to keep it in the lines.

Senior Katelyn Stewart started serving for Burgin, but West’s  front line was prepared to go on the offensive. Freshman Grace Cocanougher was able to dig the hard hit, but the return didn’t clear the net.

Burgin continued to struggle with West’s  serve and ended the first set with a 25-3 loss.

The second set started with Stewart serving for Burgin and putting the first point on the board.

The Lady Bulldogs seemed to get over the nerves that plagued them the first match and started making better passes to their front line pulling within two points of West, 6-4.

“We got the nerves out of the way and started doing things like dropping it over the net,” said Head Coach Rick Stewart.

The Lady Bulldogs seemed to improve with each volley until senior Karis Sandefur went behind the line to serve for West. Sandefur had a strong serve that was the equivalent of a curve ball in baseball and Burgin’s young team lacked the communication skills to call out whose pass it was. Sandefur went on to serve out the set 25-7.

“We have started to taking the fundamentals we have pushed all season and applying them, but we still need to work on applying them at the same time,” said Stewart.

Unfortunately for Burgin, the third match started how the second one ended. West’s Hampton served nine straight points before sophomore Hannah Stewart won possession back with a hard hit spike.

Stewart was able to put a few more points on the board for Burgin making it 10-4.

After West served into the net, sophomore Laura Burke earned herself an ace making the score 17-6.

“We lose two seniors this year, and play mostly freshman. We have an athletic class coming up from the eighth grade so we look forward to trying to make volleyball fun and exciting again at Burgin,” said Stewart. 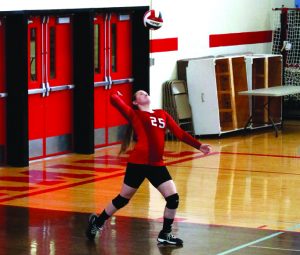 Sophomore Hannah Stewart serves the ball against West Jessamine in Burgin’s straight-set loss to the Colts in the first round of the 46th District Tournament on Monday, Oct. 8. 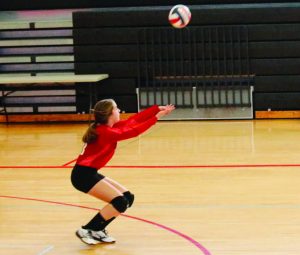 Freshman Grace Cocanaugher prepares to get in position for a dig against West Jessamine on Monday, Oct. 8, in the first round of the 46th District Tournament at West Jessamine.