Rushing the ball was the theme as the Titans dominated on the ground yet again and were able to force key turnovers in crunch time.

“I think our running game keeps getting better each week and I think we’re blocking well up front. Kaeline (Drakeford) is doing a good job of getting us in the right spots,” said Head Coach David Buchanan. “Coach Smith is in charge of our running backs and I think he’s got a great feel for the game and a great feel for when to run who. It’s all really clicked well and a lot of people are part of making that part of our offense go.”

Junior quarterback Kaelin Drakeford had a quiet night in the air, but made up with it on the other side of the ball. He went 4-for-6 with 39 yards passing, but had a key interception in the endzone on defense to seal the important district victory for the Titans.

Buchanan’s team defeated the Jaguars at their place in the playoffs last season, but haven’t won a regular season game at East since 2015, until Friday night.

“This win means a lot because the last two years they’ve beat us in the regular season. Now, we’re still playing for a home game in the playoffs and we’re still playing for a district championship and we sort of got that monkey off our back after this win,” said Buchanan. “I thought it was a really big win for us. I think East battled us and played very well. I thought it was by far the best game I’ve seen them play.”

East Jessamine answered the Mercer scoring drive with a 35-yard touchdown run by Valdon Miles, which was set up by strong runs by Taveon Dean. The extra point was blocked and the Titans held a 7-6 lead with four minutes left in the first quarter.

The Titans were set up with great field position after junior Dillon Warren’s 64-yard kickoff return to the East 18-yard line. Junior running back Bryson Yeast ended the drive on a powerful four-yard score to give Mercer County a 14-6 lead after one quarter.

The Jaguars started their next drive at midfield and were threatening to score and tie the game, but Cocanougher had other things on his mind. He made a huge stop on fourth down in the backfield to give the ball back to the Titans  near midfield.

The turnover on downs led to a two-yard touchdown run by freshman Brayden Dunn. With 10 minutes left in the first half, Dunn was the third Titan to score on the ground, putting the Titans ahead 22-6.

Mercer made another big defensive play on the next series. Senior defensive lineman Sam Warren got into the backfield for the sack on fourth down to give the Titans the ball at their 20-yard line. That drive stalled for the Titans and it eventually ended up in a punt.

East Jessamine received the second half kickoff, but the drive ended with a punt after senior Blake Russell’s sack of East quarterback Cameron Garrett on third down.

Yulee scored his second touchdown of the game on the next drive. He took it in from 22 yards out to put the Titans ahead 29-6 with 6:45 to go in the third quarter.

Taveon Dean answered the Yulee score with a rushing touchdown of his own from four yards out. The Jaguars trailed 29-14 with 12 minutes to play in the game.

The Titans needed a couple first downs along with milking the clock to the put the game away, but the worst possible scenario played out for them.

Yulee fumbled the football and the Jaguars recovered at the Mercer 48-yard line.

Garrett picked up a first down on a sneak on fourth down,  but it didn’t lead to anything thanks to Drakeford in the secondary. After picking the ball off on the previous play, the interception was called back. Fortunately, Drakeford made the best of another opportunity and picked the ball off in the endzone and taking it to the Mercer 10-yard line.

The Titans were forced to punt, but took a safety with two minutes to play.

East Jessamine got the ball back down 29-16.

Isaiah Williams hauled in a 34-yard touchdown reception from Garrett with just under two minutes to play to make it 29-22.

The Titans ran the ball out and secured the victory over a district rival.

Mercer County will be back on the field Friday, Oct. 5, when they host West Jessamine at 7:30 p.m. on senior night for another big district matchup.

The Colts’ Eli Cox, a University of Kentucky commit, is one of the best lineman in the state and will provide a big challenge for the Titans.

“They probably have the best senior class of football players to go through that high school,” said Buchanan. “They feel like this is their year and they’ve got a guy who is committed to UK. It’s a really good class and we have a big challenge this week.” 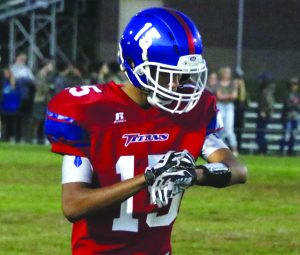 Senior wide receiver M.J. Johnson looks at his playbook after an audible against East Jessamine on Friday, Sept. 28. 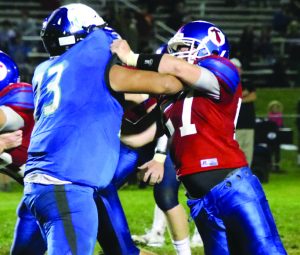 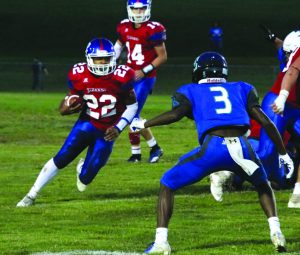 Junior running back Malachi Yulee (22) shifts is way past the line and into the secondary as East Jessamine Jaylen Taylor (3) awaits. The Titans defeated the Jaguars 29-22 on Friday, Sept. 28.