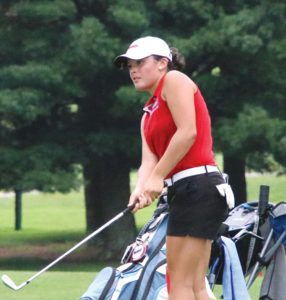 Having a small team is always tough, but the Mercer County Lady Titans girls golf team is used to that.

Head Coach Jeremy Brummett has coached Mercer girls golf for five years, and each year, the team gets smaller.

“I had five girls up until last year, three last year and now two this year. Next year, I’ll just have Emily (Bechtel),” said Brummett.

Brummett talked about the improvements of Upchurch and Bechtel.

“As an eighth grader to now, the obvious thing are the maturity for Bekah (Upchurch). She’s gotten a lot stronger. She’s been very dedicated to continue to improve her game every time out on the course. Every year until this summer, she has played non stop and due to an injury, she took about a month off this summer. I think it was a good thing for her. Past years, towards the end of the season, she looked fatigued and with much needed rest, hopefully she can finish strong in her last year,” he said. “Emily’s confidence is getting better. Her ball striking is getting better. We want to get her competing against some of the better golfers in these tournaments.” 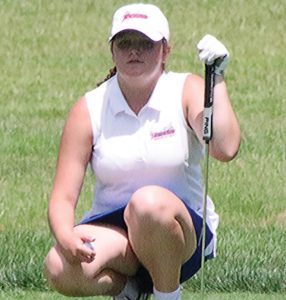 Upchurch missed the state tournament last season by one stroke. This year, she is using that as motivation to get over the hump and make it to state.

“I hope she does use it as motivation. I hope that sticks with her as this season goes on and I think committing to Georgetown College has helped. She can still continue to improve and know that’s not a burden for her,” said Brummett. “Sometimes it goes the other way. I don’t want her to think that now she’s committed, she doesn’t really have to do anything. I want her to compete in the region and win the region, because she will at least have to finish top four in the region, individually to qualify.”

Brummett said Upchurch missed out on state against a couple of player she normally beats.

“Last year, I started playing in more before school started because these girls take AP classes and juggling that is tough. These girls know what they have to do and they are more than capable of doing it,” said Brummett.

With the team growing smaller each season, Brummett has taken on the challenge of recruiting girls who want to learn the game, but that is a tough task. Phil Williams, who was the Mercer boys golf assitant coach, passed away last week and Brummett said it has been tough with William’s passing.

“We’ve tried to get into the elementary schools and make people aware. We have a couple interested, but they are brand new golfers. If you don’t play golf at an early age, it’s extremely hard to pick it up later in life and be successful,” he said. “Phil’s mission was to get more out there. He got Emily out and brought Savannah (Prigmore) back out after being away from the game for a couple years. So now, that’s going to be on my shoulders this offseason, to try and get a couple more bodies out there.”

There may be only two on the roster this year, but they are both more than capable of making noise in the region.

The next tournament for the girls will be at the Nelson County Invitational at Woodlawn Springs Golf Course, on Saturday, Aug. 11.