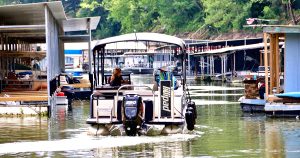 A boater makes his way out of Pandora Marina on Memorial Day. Heavy rains have the lake level back up to 728-feet, about 12 feet shy of the normal summer pool.

The water level at Herrington Lake is currently at 728 feet, still below the summer pool but good enough for most of Mercer County’s marinas to reopen their boat ramps.

The lake is being kept lower this summer to allow work on replacing Kennedy Mill Bridge.

The work was scheduled to happen earlier this year. The contractor, Walsh Construction Inc., asked Kentucky Utilities (KU) to hold the lake at 720-feet for at least 10 days to allow concrete to be poured. But the work was delayed due to the heavy rains of March and April.

Those rains nearly wrecked the season, which was already endangered by the closing of the bridge, but the rain may end up saving the system. Last week, 1.8 inches of rain fell on Mercer County, said Jerry Arnold, production manager of the KU’s E.W. Brown Generating Station.

Arnold said they held the lake to 728-feet one night this weekend so the contractor could finish drilling.

KU is keeping the lake at 734-feet, six feet below the normal summer pool, to allow the bridgework to continue.

The scheduled completion date for the bridge is November 2019, but many local residents have been pressuring state officials to speed up construction.

“I don’t have anything bad to say about the bridge people,” said Barnes, who owns Chimney Rock. 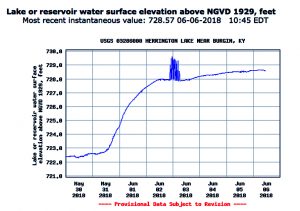 The level at Herrinton Lake is a little over 728 feet, according to the United States Geological Survey. Check the current lake elevation by visiting the USGS website at https://waterdata.usgs.gov/nwis/uv?site_no=03286000.

Barnes said the contractors are working 16 hours a day.

Meanwhile, the lake season will be kicking into high gear next month, with Independence Day festivities.

The Herrington Lake Conservation League will be holding the second annual Lighted Boat Parade on Saturday, June 23, from 9:30–10:30 p.m. at Kennedy Mill Bridge.

The entry fee is $50 with proceeds going to the Conservation League’s cleanup fund. Prizes will be awarded for the best decorated boat.

There will also be a silent auction at Kamp Kennedy that day at 10 a.m. to benefit Lights Over Herrington, the Independence Day fireworks show, which is being held on Saturday, June 30. Organizers are still looking for donations for this year. You can reach them on the Lights Over Herrington Facebook page.