You rarely see freshman get a lot of playing time in college baseball unless they are truly special with a ton of upside. Former Mercer County graduate Mason Hazelwood is one of those freshman.

Hazelwood just completed his first season coming out of the bullpen for the Kentucky Wildcats baseball team.

Hazelwood earned his first win of the season in UK’s  4-1 win over Mississippi State on Saturday, May 12.

Despite getting his first win, it was just another day at the ball park for Hazelwood.

“Honestly, my first win is no different than any other game,” he said. “I went out and did my job and it just so happened that the win was given to me.”

Hazelwood said he was nervous his first time out on the mound, but settled down after his first start.

“Nerves were a factor the first time I went out on the mound, but after I got the first one out of the way, I slowed down the game and began to enjoy it,” he said.

Despite becoming a better pitcher on the mound since his senior year as a Titan, there was another aspect of his game that has improved at the college level.

“My mental portion of the game has changed more than anything since high school,” he said.

Not every player is perfect by any means, in any sports, and every player experiences low moments throughout the year.

Against Miami University (OH), Hazelwood came out of the bullpen and quickly gave up two runs on two hits. Despite the Wildcats getting the 13-7 victory over the Redhawks, individually, Hazelwood was not pleased with his performance.

“After the Miami game, I hit rock bottom. I realized I was ‘throwing’ and not pitching,” he said. “I had to take a week or two and re-learn the basics and get back in a routine.”

Hazelwood’s following outing against Louisville was much better. He pitched one inning out of the pen, allowing one hit and earning two strikeouts. The Wildcats also walked away with a 5-2 victory against the Cardinals on Tuesday, April 3.

Hazelwood credits UK’s coaching staff for believing in him and giving him the confidence every time out on the mound to record outs.

“All of the coaches have molded me into a better player and person in numerous ways,” he said. “Coach Mingione has motivated and supported the team and myself every day this year and Coach Belanger, our assistant coach, has developed me mentally all season.”

Hazelwood said being around great players everyday has been a huge plus.

“It’s made me realize how lucky I am to be in this program. Not only are they great players, but great people,” said Hazelwood. “On the field, Kole Cottam is one of the best, but off the field he is also one of my biggest motivators. He has taught me through his actions that there is more to baseball than just being a sport.”

Hazelwood has cherished his short time as a Wildcat, and is looking forward to the next three seasons.

“It’s been crazy,” he said. “This time last year, I would have never thought that I could improve as much as I have and be able to play my freshman year.” 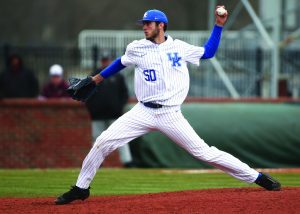 Mason Hazelwood just completed his first season coming out of the bullpen for the Kentucky Wildcats. The freshman graduated from Mercer County High School in 2017 and was named All-State in his senior year as a Titan. (Photo submitted by UK Athletics)