History arrives with a boom! at the 10th annual Settlement and Raid at Old Fort Harrod State Park. The raid is a full scale re-enactment of colonial life with traders, settlers, British, Natives and more. The reenactments happen Saturday June 23, and Sunday, June 24, from 8 a.m. to 5 p.m.

But while the raid is still the big draw, it’s not the only thing this year. New this year is Tavern Night in McGinty’s Ordinary on Friday, June 22.

On Saturday night, the Celtic/Americana folk band Father Son and Friends will perform, starting at 7:30 p.m.

There is no additional charge for the concert, it comes free with the admission to the event.

Father Son and Friends dates back to 1989, when father and son Joey and Shawn Hall started a band with their friends.

Over the years, they have played on tour with Mumford and Sons, appeared on TV and radio and received an Irish Music Award Nomination for “Top Traditional Band in a Festival, Theatre, Pub.” 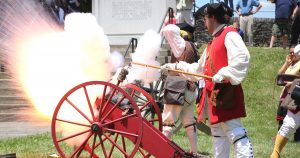 Have a blast while learning history at the Settlement & Raid at Old Fort Harrod State Park.

It’s a great time to get reacquainted with Old Fort Harrod, a full-scale replica of the fort built by James Harrod in 1774.

The park also includes the Mansion Museum, the George Rogers Clark Federal Monument, the Lincoln Marriage Temple and the oldest cemetery west of the Alleghenies.

For more information, call Old Fort Harrod at 734-3314 or send an email to fortharrod@ky.gov.