The Mercer County Lady Titans softball team (20-14) run in the 12th region tournament ended Tuesday night, May 29, to the Boyle County Lady Rebels by a final score of 6-1.

“We only struck out twice the whole game. We put the bat on the ball, but we just couldn’t get timely hits,” said Mercer Head Coach Rob Tharp. “Katy Grace (Chadwell) did a really good job throwing her changeup and keeping us off balance.Our kids fought to the end. We were putting the bat on the ball all game, we were just hitting it to spots.”

“Kayleigh (White) and Stevie (Shephard) both did a good job for us in the circle. I was fine with Kayleigh, I just wanted something different when I brought in Stevie in the third inning,” said Tharp. “We changed it up and Stevie threw really well, only giving up two runs the rest of the game. That’s just the way it goes sometimes. That’s the game of softball. They were putting the ball in play and getting timely hits throughout the game.”

Katy Grace Chadwell earned the win for Boyle County, pitching all seven innings, giving up one run on six hits, with no walks and two strikeouts.

The Lady Rebels struck first in the bottom of the second inning when Kelly Lay double on a line drive to center field, scoring Keely Bowling.

Boyle added three more runs in the bottom of the third. Channing Whitehouse singled to left field, scoring Izzy Gervacio to make it 2-0. The next batter was Chadwell, and she homered to center field off the scoreboard to give Boyle a comfortable 4-0 lead.

Boyle’s next run came in the bottom of the fifth when Gracie Edmiston singled to center field, scoring Whitehouse. Boyle’s last run of the game came in the sixth inning off the bat of Madison Robbins. She grounded out to first, but Hailey Cannon was able to score from third.

The Lady Titans, as they have done all season long, never gave up. After junior Abby Rogers singled into left field, senior Maddie Williams drove home Rogers after she advanced to third on a steal, with a line drive single into center field to put the score at 6-1.

Freshman Brooklin Burgess had a solid game at third base. She was able to pick off a few runners and prevented more runs on the board for Boyle.

Senior Loren Hahn also threw out a couple runners trying to steal second to end the first and fourth inning.

“I thought we did a really job defensively of neutralizing some of their run game,” said Tharp. “Those kids we were throwing out don’t get thrown out much if you look at their state throughout the season.”

The Lady Titans had chances to score more early in the game, but stranded runners to end multiple innings, six in total.

Mercer loses only two seniors for next season, Hahn and Williams, and have a very young core returning for the 2019 season. With six sophomores, six freshman, two eighth graders and two seventh graders making up their core, the future is very bright for the Mercer County softball program.

“We’re so young. We pitched a seventh grader and a freshman in the region semifinals. We played a lot of girls that have never been in these types of situations before and it will only help them going forward,” said Tharp. “Our seniors kept us together, held their ground and they were our rock this whole season. They did a really good job of setting an example for the younger group going forward. I told them after the game that I loved every single one of them and that we will be back in the position in the future.”

White and Shephard were named to the 12th Region All-Tournament Team after the game. 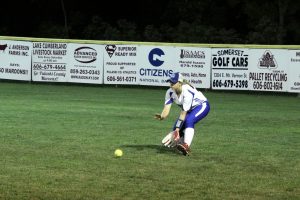 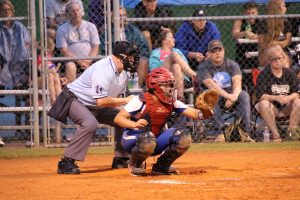 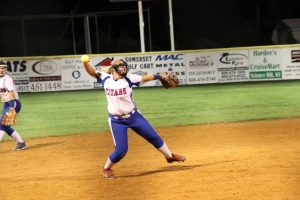 Brooklin Burgess fields a grounder to third and throws over to first for the out against Boyle County. (Photo by Arpan Dixit) 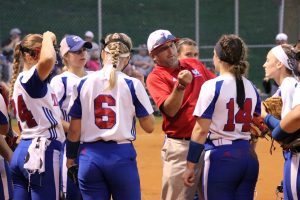 Head Coach Rob Tharp (in red) talks to his team in between innings against Boyle County. (Photo by Arpan Dixit)

After a tough loss in the 46th district championship to East Jessamine, the Mercer County Lady Titans softball team (19-14) regained their hot bats, on their way to a 9-2 win over the Southwestern (20-9) Warriors in the first round of the 12th region tournament on Monday, May 28, at Pulaski County High School.

White earned the win for Mercer, pitching all seven innings, giving up two runs on seven hits, with three walks and three strikeouts.

Lille Turpin took the loss for Southwester, pitching two-third innings, giving up four runs on four hits, with one strikeout.

The Lady Titans could not have gotten off to a better start. They scored six runs in the top of the first inning to put the game out of reach early.

“It was great to see the start we got off to. We’ve had moments like that all year to where we overwhelm somebody by hitting the ball hard and over the defense, whether it’s over the fence or into the outfield.” said Rob Tharp.

Sophomore Taylor Sallee, along with freshmen Ry’ann Tharp and Brooklin Burgess all homored within the first two innings to give Mercer a comfortable 8-0 lead after two innings of play.

After Sallee’s two-run home run that gave Mercer a 2-0 lead, Tharp doubled on a line drive to center field, scoring sophomore Leia Freeman to make it 3-0.

Burgess was the next batter and sent one over the left field fence to give Mercer that comfortable 6-0 lead after one inning.

White was able to strikeout Gwin to get out of a jam with two runners in scoring position in the bottom of the first.

Sallee worked a one-out walk before Tharp hit her home run off the scoreboard in center field in the top of the second to make it 8-0 Mercer.

White cruised in the bottom of the second inning, thanks in part to Freeman’s defense. After Emory Wilds singled into right field, Freeman caught a line drive by Holly Bunch, and quickly tossed it over to first to pick off Wilds for the double play.

The Lady Titans were threatening to score more runs in the top of the third, but White grounded into a fielder’s choice double play, stranding two runners in scoring position.

White went 0-for-5 at the plate, but her pitching certainly made up for it.

“She stepped up again like she has done all year. She’s only 13 years old, only a seventh grader, and she’s got tons of upside and ability. She continues to show us that all the time,” said Tharp. “She did a really good job of getting ground-ball outs and timely strikeouts. The defense played really well behind her.”

“We had a lot of fly balls hit to right field. Stevie Shephard had a really good game out there,” said Tharp.

After a quiet fourth inning for Mercer, Southwestern finally got on the board in the bottom half. Gwin reached first on an error by Sallee at first base, Turpin and Emory Wilds worked walks to load the bases for Ashtyn Hines. Hines singled into left field to score Gwin to make it 8-1. Although White gave up only one run, it could have been worse with the bases loaded by the young pitcher came through. She forced a fly out to end the inning and limit the damage to one run.

The Lady Titans scored their ninth and final run of the game in the top of the fifth inning. Hahn doubled to right field to lead off the inning. Freeman came in to pinch run for Hahn and quickly advanced to third on  sacrifice fly by Burgess. Williams drove in the final run on a dropped third strike, scoring Freeman to make it 9-1 Mercer.

Southwestern added another run in the bottom of the seventh on an error by Shephard in right field, but it was too little, too late.

The Lady Titans will be taking on defending 12th region champion Boyle County, in the region semifinals. The Lady Rebels are   one of the very few region teams Mercer hasn’t faced this season.

Tharp talked about the challenge.

“We welcome the challenge and are excited about getting the opportunity to face them. They are the defending champs from last year until somebody beats them,” said Tharp. “We’re going to have to have a similar performance like tonight in order to beat them. If we can come out and hit consistently and put pressure on them, I think we’re going to be okay. I expect their pitching to give us more fits, but I think we got it in us to come out strong and earn the win.”

Sallee, Tharp and Burgess led Mercer with two hits each. Tharp was the team leader in RBI with three.

Emory Wilds led the Warriors in hits with two, while Ashtyn Hines drove in the only RBI. 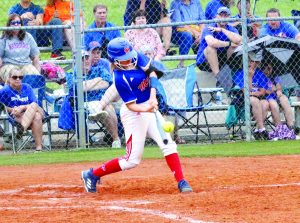 Taylor Sallee makes contact with a pitch and homers in the first inning against Southwestern. (Photo by Arpan Dixit) 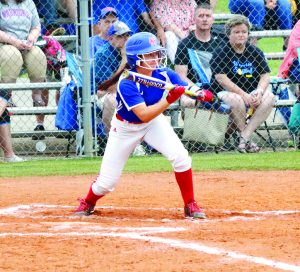 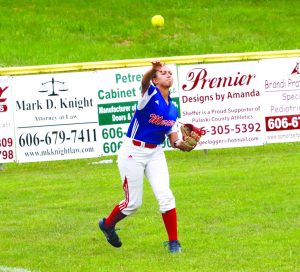 Ry’ann Tharp fields a single into left field and throws the ball back in play against Southwestern. (Photo by Arpan Dixit) 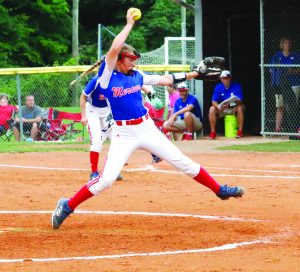 Kayleigh White winds up for a pitch against Southwestern. (Photo by Arpan Dixit)