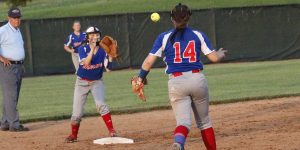 Junior Leia Freeman (14) flips the ball to sophomore Brinkley Prewitt for a force out at second base in the 46th district championship game against East Jessamine on Tuesday, May 22. (Photo by Arpan Dixit)

Hannah James continues to prove she is one of the best pitchers in the state with another victory under her belt. She pitched all seven innings, giving up no runs on three hits, with no walks and 12 strikeouts.

“She (James) is one of the best pitchers in our state. She’s got a lot of movement on her pitches that we don’t recognize early enough to make a decision. You see late decisions, a lot of pop-ups, weak grounders and strikeouts. We had some balls put in play, but left a couple runners out there,” said Head Coach Rob Tharp. “Six runs came on two swings so we have to be careful facing their best hitters. I thought we fought all the way till the end, we just left some runners stranded.”

Seventh grader Kayleigh White took the loss for the Lady Titans, pitching five innings, giving up nine runs on 10 hits, with four walks. Freshman Stevie Shephard pitched the final inning for Mercer, giving up no runs and no hits, with one walk.

“Kayleigh (White) did a good job. She’s very young, and looked a littler nervous out there to start. Stevie (Shephard) came in a did a good job for us, not allowing any hits or runs,” said Tharp. “We played good defense behind them for the most part. I wish our bats could’ve stayed hot from the prior game, but Hannah (James) put a stop to that.

The Lady Titans put a beating on West Jessamine in the first round of the district tournament, winning by a final score of 16-2. White and junior Leia Freeman led Mercer with four hits each. Freeman also led the team with four RBI.

East jumped out to a 1-0 lead in the third inning off a sacrifice fly by James. Karlee Terral and Madison Stinnett had two more RBI before East Jessamine decided to hit a couple over the fence later on in the game.

Six out of the nine East runs came off home runs. James is also a very strong hitter. She hit a grand slam in the bottom of the fourth inning to extend East’s lead to 7-0. She led East with five RBI and was tied with Haylee Stansbury and Mallory McDowell with two hits each.

McDowell homered the next innings to score the last two runs of the game for East.

Mercer got their first base runner on in the fourth inning when sophomore Taylor Sallee got on first base after a throwing error. Their first hit came off the bat of senior Loren Hahn when she doubled to deep center field.

Senior Maddie Williams and Shephard both singled in the sixth inning on back-to-back plate appearances, but James was able to get out of the jam.

Tharp talked after the game about his team keeping their momentum heading into the 12th region tournament next week.

“We’re going to let them rest a little bit and get right back at it. With the last day of school and graduation coming up, it’s a lot of handle,” he said. “We’ve got to just get back to work and take a lot of batting practice. We’re going to keep doing our infield and outfield drills and stay with our routine. With a young group, I think they’ll have a short-term memory with this game because we will likely not face East until, hopefully, the region title game. We’ve played everybody in our region, except for Boyle, but I feel like we can compete with anybody. No matter who we draw, we should have confidence.”

Williams, Shephard and Hahn led the Lady Titans with one hit apiece.

The Lady Titans will take on the Southwestern Warriors in the first round of the 12th region tournament at 4 p.m. on Monday, May 28, at Pulaski County High School. 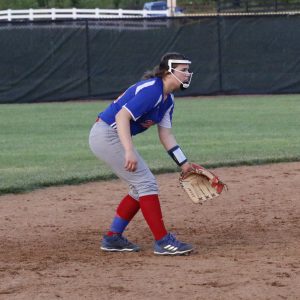 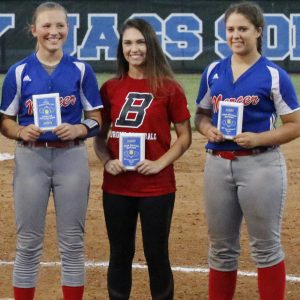 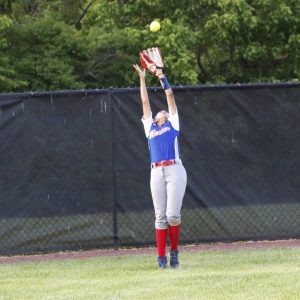 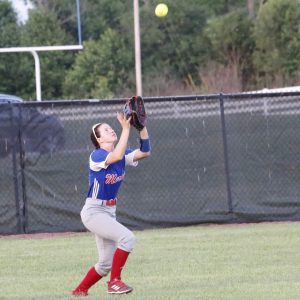 Senior Maddie Williams gets under a fly ball for the out to end the inning. (Photo by Arpan Dixit)