Thousands of Kentucky teachers descended on Frankfort Monday to voice their opposition to a surprise pension reform bill that passed last week.

According to the Lousiville Courier-Journal, all 120 Kentucky public school districts closed Monday. While most districts, including Mercer County and Burgin Independent, were closed due to spring break, 21 counties closed so teachers and administrators could attend the rally.

“That’s a pretty good indication educators are unhappy with the way this so-called pension reform has been managed,” said Erin Milburn, an English teacher at Mercer County Senior High School.

Milburn did not attend Monday’s rally. She was driving back on Tuesday from a visit with family in Louisiana.

Facing opposition from teachers and other state employees, pension reform appeared dead until last week, when the proposal was added to Senate Bill 151, which covered sewer services, and passed along party lines with no debate or public hearings.

“The whole process has had the appearance of being less than transparent,” Milburn said.

With 18 years of service in the Kentucky Teachers Retirement System—the last 12 as a teacher with Mercer County—Milburn said she is not really affected by the pension reform, which diverts new teachers into a hybrid cash balance plan, in which members contribute a defined amount from their paycheck. But she said she has many colleagues and friends who would be affected.

The pension reform bill is currently waiting to be signed into law by Gov. Matt Bevin. If it’s signed and survives legal challenges, Milburn said her next step will be finishing out the school year and helping the seniors in her class get ready for life after high school.

“That’s what I’ll be focussed on,” she said.

But she said she plans to use her free time this summer on purging the state government of what she called “anti-education” legislators, noting that 53 teachers are currently running for office in Kentucky.

Milburn noted the recent teachers’ strike in West Virginia as well as the teacher protests in Oklahoma and Arizona.

“Across the country, there is a backlash due to what tends to be the conservative view in public services,” she said. “Tax cuts sound great, but they hurt public services. We depend on taxes.”

In Oklahoma, teachers said a $6,000 pay raise—after a decade with no salary increase—was not enough. Last week, about 200 of the state’s 500 school districts shut down as teachers walked out to demand a $10,000 raise as well as additional funding for schools and raises for support staff like bus drivers and custodians, according to the New York Times.

The irony is that teachers’ unions in Kentucky, West Virginia, Oklahoma and Arizona are barred from compelling workers to pay dues. Yet that has not stopped protesters from demanding a bigger commitment for education from recalcitrant lawmakers.

Milburn wants to make it clear pension reform is not the only thing teachers are worried about.

Like other teachers, she is worried about the final state budget and possible cuts to state transportation funding.

“Any reduction in transportation costs is going to impact instruction sooner or later,” Milburn said. “We are concerned about making sure all kids have access to a high quality free education.”

“I think it does violate the inviolable contract but that will be for the courts to decide,” he said.

Davis said he also disagrees with the way the bill was passed.

“This pension bill was passed without many of the representatives  reading what was in the bill,” he said. “According to multiple legislators, this is common practice from both parties. Shameful and Kentucky deserves better!”

“The process was not acceptable to me and several members of the senate,” Buford said. “We need to share all this with other members of the minority party and the public. Issues of this magnitude should be offered throughout the state for about six months before a vote.

“I know this is a difficult process but if you do not do it right, when will you ever take the time to do it the right way again?”

Buford said it was the General Assembly’s job to uphold the law, not circumvent it. “We should be the cornerstone for America and Kentucky,” Buford said. “It is our duty for all citizens as well as future generations, to recognize the sublime truth and vote accordingly. 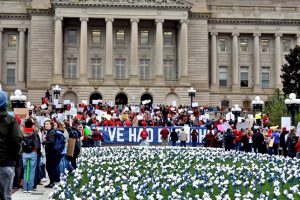 Thousands of educators rallied Monday to protest a pension reform bill that was attached to a sewer bill and passed along party lines with no score or public hearing. Gov. Matt Bevin is expected to sign the bill, which will face legal challenges, including from the Kentucky Attorney General.