Like the boys program, the Mercer County Lady Titans tennis program is undergoing changes as well.

Lyons has coached in other sports like football, basketball and baseball, but this is his first opportunity to coach tennis.

He hopes to motivate his team to compete for 12th Region titles.

“I’m brand new to tennis, but I’m a quick learner,” said Lyons. “I hope to get these girls competing for region titles individually and as a team.”

Matches will be played in terms of six-point and nine-point matches.

Listed below is the Mercer girls tennis roster organized by grade.

The Lady Titans are returning everybody from last season. From the first few weeks of practice, Lyons knows this group of girls want to get better each and every practice and match.

“We’ve won both matches we’ve played so far and I’m proud of what we’ve done to this point,” said Lyons.

Tennis is an individual sport, but Lyons says winning as a team is a top priority.

Lyons said he is disciplined on how he does things.

“Nothing is given to you. You have to work for it. There has to be a different attitude on how you approach the game to change that,” he said. “That’s been my biggest emphasis to this point. I don’t care where you’ve been, I care where you’re going.”

He said being new to the sport, he has to keep an open mind and learn everyday.

Seeding for the Lady Titans is listed below, based off their previous five-point matches.

Barnett, Li, Murray, Thompson and Bryant have the opportunity to play singles in matches as well.

In doubles, Thompson and Long will be the number one seeds, while Boutin and Bryant will play number two. Seeding can change based off opponents, according to Lyons.

The Lady Titans defeated Garrard County in their last match 5-0, on Tuesday, March 27.

In doubles, Bryant and Boutin won 8-0, while Thompson and Long won 8-5.

The Lady Titans will be back on the court Tuesday, April 10, when they travel to take on the Lincoln County Patriots. 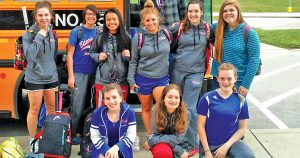