Lake talked about her first experience in the Lone Star State.

“I had never been to Texas before. It was definitely a big place. Although, the Alamo was way smaller than I thought it would be,” she said.

She was one of 16 players who competed in a bracket vote for the last spot in the field consisting of eight players.

“It’s a huge honor to be named one of the top shooters in the nation,” said Lake. “It was an amazing experience and I was blessed to be a part of it. I’m extremely thankful to the community and everyone who voted for me. It’s something I will never forget.”

The eight players competing had two chances to shoot five racks of six basketballs. Lake scored 19 out of a possible 30 in the first round and 20 in the second round. The totals were added up between the first two rounds and the two highest scoring shooters (Mikesell and Lake) battled it out for the championship.

Mikesell won with a score of 23, while Lake scored 15 in the final round.

Lake was a 42-percent shooter this year for the back-to-back state champion Lady Titans, and made a total of 321 three-pointers in her high school career.

She knows this is a once in a lifetime opportunity for a lot of high school players and it’s something she’ll never take for granted.

“It was just a great experience getting to meet new people and spend time with some of the best shooters in the nation,” said Lake. 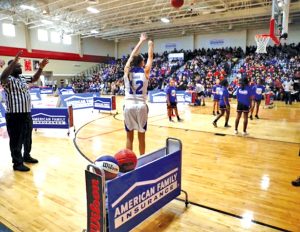