The Burgin Lady Bulldogs (0-1) were finally back out on the field after almost two weeks of rained out ball games. Unfortunately, their 2018 home opener ended in a 14-1 loss to the Villa Madonna Blue Lightning (0-0) in five innings on Tuesday, April 3.

Although The Lady Bulldogs dropped their home opener, Head Coach Taylor Bottoms was happy that her team was finally able to play a game.

“With the weather, it’s been kind of crazy, so in terms of field time, we’ve been very limited,” said Bottoms. “But we’re just coming out and working on fundamentals and repetition. It’s hard to practice in-game situations until you get in a game, so we’re just ready to get in as many games as we can the rest of the season and use that to our advantage.”

Although Villa Madonna won by 13 runs, through the first three innings, it was anybody’s ball game with the Blue Lighting leading 5-1.

Unfortunately for Burgin, the fourth inning was troublesome. Villa Madonna reeled off nine runs in the fourth, on a combination of hits and a few errors by the Lady Bulldogs.

“A lot of it is just our mentality. We still look really nervous out there, and a lot of that has to do with our inexperience and youth,” said Bottoms. “I’m trying to get the girls to get over that and gain a little bit more confidence in themselves, because they do have the fundamentals, so it’s just preparing themselves mentally.”

Senior pitcher Grace Osbourn took the loss for the Lady Bulldogs. Brooke Meier earned the win for Villa Madonna in their first game of the 2018 season.

Despite the loss, Bottoms has seen improvement in her team since their first game played back on March 20.

“I think our girls are a lot more comfortable this game than they were last game. We got more girls on base this game and I think they’re seeing the progress,” she said. “But we’ve only got two games under our belt, so the more games that we play, the more they’ll get used to being on the field and getting over the nerves.” 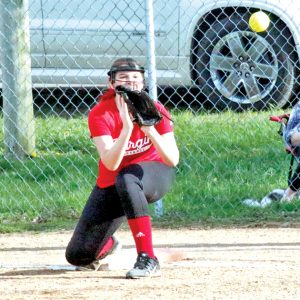 Eighth grader Brynn Simpson concentrates to catch the out at first base. The Lady Bulldogs dropped their home opener 14-1. (Photo by Arpan Dixit)