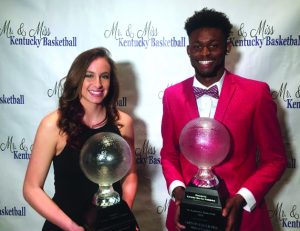 Seygan Robins and Trevon Faulkner pose with their Mr. and Miss Kentucky Basketball trophies after the ceremony concluded. (Photo by Arpan Dixit)

Trevon Faulkner and Seygan Robins of Mercer County Senior High School became the first two players from the same school to win the prestigious Mr. and Miss Kentucky Basketball awards in their respective genders, at the awards ceremony in the Lexington Center’s Bluegrass Ballroom on Tuesday, March 13.

Kentucky high school basketball has been around for a long time, and for both winners to come from the same school is historic, and might never happen again.

For Faulkner, his high school career ended in an unfortunate way in a loss to Southwestern in the 12th Region championship game, but one game does not define the type of player Faulkner has become in his time as a Titan. Faulkner will be taking his talents up north to play for Coach John Brannen at Northern Kentucky University.

He became the first boys players to win the award from the 12th Region and talked about winning the Mr. Kentucky Basketball award after the ceremony.

Faulkner ends his career with 3,032 points and 1,100 rebounds. Those two stats along put him in a prestigious group. He is one of only five players in Kentucky high school basketball history to accumulate more than 3,000 points and 1,100 rebounds in a career. Faulkner finished with a 136-51 overall record as a Titan, the winningest players in program history. He has also won many all-district and all-region awards while also winning 12th Region Player of the Year.

Robins, who will be playing for Coach Jeff Walz at the University of Louisville next season, just ended her high school career the best possible way, a way most players could only dream of their careers ending.

This past weekend, she helped lead the Lady Titan basketball program to back-to-back state championships, while also taking home the state tournament MVP award for the second straight year.

She complimented Faulkner and talked about ending her career by winning the Miss Kentucky Basketball award.

“We both worked really hard and for both of us to win is awesome,” said Robins.

Mercer County was well represented at the award ceremony. Players from both Titan and Lady Titan basketball programs came to support their teammates.

“We had a lot of people here from Mercer. My team is really supportive of me. It’s just really great to have such a strong community behind us,” said Robins.

“What a way to cap your career. I don’t know what else she could have done as a player. She’s just one of those leaders you dream for as a coach,” said Lady Titans Head Coach Chris Souder.

“It’s hard to put into words. There is not a kid that’s more deserving. He was smiling all day today leading up to this. I think that’s the lasting impression I’ll always remember,” said Hamlin. “I don’t know if I’ll ever be able to coach players like Seygan and Trevon ever again. To have this award come back to Mercer County is just surreal.”