Trenton Easterling has been found guilty of the murder of Tristan Cole and sentenced to 30 years in prison.

Easterling was found not guilty of a related charge of 1st-degree robbery.

While the defense tried to make the trial about Zachary Lay, who was found guilty of two counts of evidence tampering related to the murder, Easterling was ultimately convicted on his own words.

On the first day, jurors were shown a recording of Easterling speaking with his grandfather and his mother back in 2016. When asked if there was anyone else involved, he shook his head no. When asked why, Easterling could be heard saying, “He threatened one of my friends.”

“That’s the case for the commonwealth,” Commonwealth’s Attorney Richard Bottoms told the jury during his summation.

Following the trial, Bottoms said he was happy with the verdict.

“We believe it was appropriate based on the evidence we were able to give them,” he said.

Calling the prosecution a “team effort,” Bottoms thanked the investigators and court officers for all of their work on this case, which has lasted over two years.

He had asked the jury to give Easterling the maximum, a life sentence, which would have meant Easterling would have served at least 20 years in prison and, if and when he was released, he would spend the rest of his life on parole.

After the trial, Bottoms said he accepted the jury’s decision.

“We trust the judgement of those 12 people,” he said.

“I was devastated,” said Stacy Koontz, one of Easterling’s lawyers. Koontz has represented him since he was first arrested back in 2016. Koontz and the rest of Easterling’s legal team will be pursuing an appeal based on what they felt were trial errors, she said.

Cole’s sister, Brandy Allen, objected to how Easterling’s legal team characterized Cole during the trial. At one point, the lead attorney, Ephraim Helton of Helton, Walter and Noelke, had accused Cole of “trafficking” guns.

“It was insulting,” Allen said afterwards. While she respected the jury’s decision, she was still unhappy with the sentence.

“We felt like he was given too light a sentence,” she said.

Allen said her brother, who had lost his mother to suicide the year before his murder, had never been in any trouble.

The family say Tristan Cole was a good kid who looked out for his schoolmates and planned to join the National Guard after graduating high school.

Allen called Cole’s death “a loss for the whole community.”

“He really was wonderful,” she said. 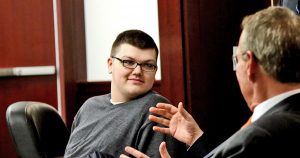 Trenton Easterling talks with his lawyers while awaiting sentencing. His legal team say they plan to appeal the verdict.