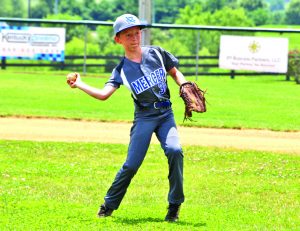 The Mercer County 11U Little League All Stars started their  tournament with a 9-3 victory over the team from Powell County Sunday afternoon.

Wade Lane started on the mound for Mercer. Lane had pitched well for Mercer leading up to the tournament, but struggled early striking one out and walking the bases loaded.

Regon Southworth threw his first pitch, when Powell’s Luke Hood ripped a liner toward first base. However, Lane was there to snag it and make the dramatic dive to beat the runner back to first for the double play.

Keenan Hobbs got Mercer started with a single and Byron Collier took one for the team and got on base, earning an  award-winning bruise.

Trevor Ellis got on base due to an error and Hobbs capitalized, scoring the first run. Landon Yates hit a single to center scoring Collier and Mercer closed out the inning up by two. Southworth struck out two in the second inning and allowed only one run. Lane was walked on balls and scored by stealing home. Hobbs had the only hit for the inning.

Powell scored two runs in the third, with outs coming from a flyout to Hobbs at short stop, a fielder’s choice from Hobbs to second baseman, Branson Sims and Ellis throwing out the runner trying to steal second. Mason Huffman nearly got Cam Delarosio out at second, when he came up with a cannon on a hard hit ball to right.

Mercer struggled at the plate during the third inning going three up and three down, leaving the score tied 3-3

In the fourth, Mercer earned three quick outs with two strikeouts and a lineout down the first base line.

Sims, the leadoff hitter, got on due to error, Hobbs moved him around on a single, Byron Collier brought Sims home on another single. Ellis grounded out, but earned the RBI with Hobbs extending the lead, 5-3.

Lamarr Batts earned a single with a hard hit ground ball to start the fifth. Lane got on due to error and Sims brought them both home with a double. Southworth, not being outdone, earned a double and brought Sims home. Collier singled on a fly to right and brought Southworth home. Ellis singled with a fly over the third baseman’s head. Mercer closed out the inning 9-3.

Powell County scored one run in the second and two runs in the third. They finished with three runs on three hits with three errors.

Mercer scored two in the first, one in the second, two in the fourth and four in the fifth. They finished with nine runs on 10 hits and one error. Mercer advanced to the next round of the tournament and plays today, Thursday, June 6, at 3 p.m.