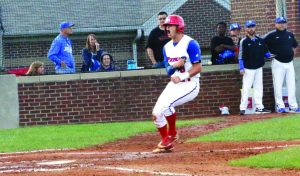 Big time players show up in big time games, and that is exactly what senior Mason Hazelwood did. It is performances like this one is why Hazelwood is going to be a Kentucky Wildcat next season. Hazelwood threw a no-hitter against East Jessamine (12-16) on the Titans way to a 10-0 win in five innings. The southpaw pitched five innings, giving up no runs on no hits, one walk and 10 strikeouts. The lone walk was the only thing that separated Hazelwood from a perfect game.

The Titans dominated every aspect of the game tonight and East Jessamine had no chance to score any runs. Mercer was also very sharp in the field, committing no errors on the night.

“We finally clicked in all three aspects of the game and it certainly was the right time to do it,” said head coach Adam Shartzer.

Zach Perrin took the loss for the Jaguars pitching two innings, giving up three runs on six hits, two walks and no strikeouts.

It was a three run Mercer lead heading into the bottom of the fifth, until the Titan bats woke up and sent East Jessamine home packing. Juniors Hunter Armstrong and Noah Irvin, along with senior Tanner Robins led the Titans with two hits each. Robins doubled twice in four at bats. Hazelwood, senior Trevor Allen, sophomore Jamason Sherrow and senior Ty Sims were the other Titans to get a hit.

Allen led the Titans with three RBIs and Hazelwood, Irvin and Sims each had two a piece.