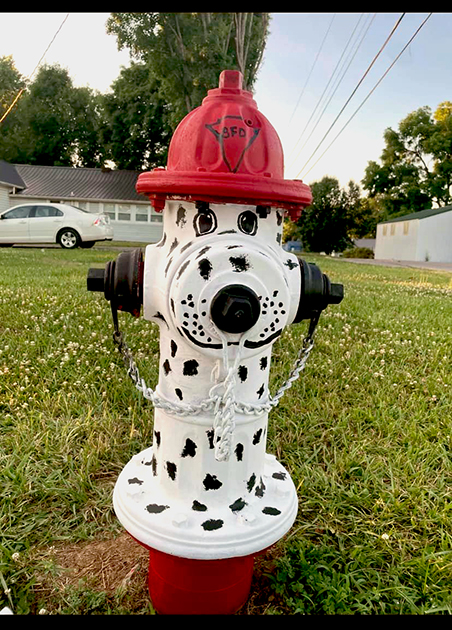 Photo Submitted
Burgin Adopt A Hydrant
The hydrant located at West Mill and South 1st Street in Burgin, is the first in the city’s Adopt-A-Hydrant program. If you’d like to adopt a hydrant, call Burgin City Hall at 859-605-9652.

The contract, in which the city handles billing while the sanitation district handles the operation of the sewer system, was set to expire on June 30. Burgin Mayor Jim Caldwell said he had spoken with the sanitation district and they had refused to negotiate with the city about adding a surcharge to the sewer bill. Caldwell said the district had to make a counteroffer or arrange to handle billing themselves.

James Dunn, the chairman of the board of directors, objected to Caldwell’s characterization of the discussion. Dunn, who attended the Burgin City Council meeting on Tuesday, June 14, said the contract has an automatic five year renewal, unless one side or the other gives a 60 day notice to opt out. He said as far as sanitation district is concerned, the contract renews automatically.

Dunn said the city’s offer to add a five dollars surcharge to every household sewer bill was meant to make the sanitation district—which last year reduced bills for customers who use less than 2,000 gallons a month from $40 to $32 a month—look bad.

“We listened to what the community said and we went in and adjusted the rates,” Dunn said. “Now how is it going to make us look if we go in and ask for an additional five dollars?”

While Caldwell cited escalating prices for supplies and labor as why he wanted to consider the surcharge, Dunn said the district faces the same issues with.

“Everything we get back goes into the Mercer County Sanitation District,” said Dunn. “Not one time have we had a positive outlook at the end of the fiscal year.”

“If we decide to not renew, we need to look at other things we could possibly do,” Dunn said.

“By the time we mail the bills out we’re making no money from the sewer at all,” said Caldwell. Burgin has not gone into a hole yet, he said.

Councilman Jamie Keebortz asked what would happen if the city were to relinquish billing.

“What is the possibility of there being a cost increase on your side to the customers?” Keebortz asked.

Dunn said there would be no increase to the customers. Although he said if prices keep increasing, the district could not assume the costs. He noted district had raised the rates for road cuts and extra service.

“We try to be fair to our community,” Dunn said. “We have always been transparent.”

While some in the community have complained about the sewer, which was completed in 2018, but Dunn said it had been a positive for Burgin.

“How many homes here in Burgin would have been built if it were not without the sewer?” Dunn said.

City officials noted new construction was being planned on Dean Drive, with up to 32 houses in the first phase and the potential for more. The expected price of the homes being planned range from $180,000 to $250,000, according to Mayor Caldwell, who said, “It’s going to be a nice addition to the city.”

Reading over the agreement, Councilman Joe Monroe noted the contract would renew at the current rate until 2027 if the city did nothing. Caldwell, who said he was in favor of negotiating, asked what the board wanted to do. Councilman John “Skippy” Stamps moved to renew for five years. Morgan seconded. The motion passed unanimously.

In other business, the Burgin City Council gave second and final reading to the city’s $1.4 million budget for the upcoming fiscal year, which starts July 1.