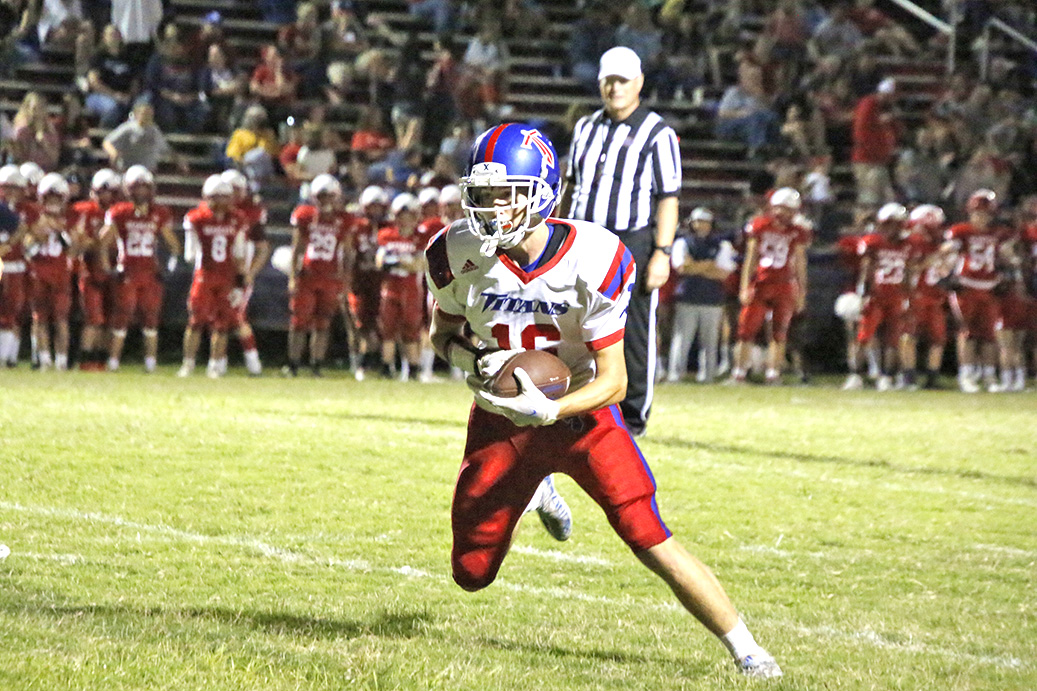 The Harrodsburg Herald/Wesley Bird
Senior Austin Beasley scored with a three yard toss, putting the Titans up 58-12 in their dominating win over his former team, the Anderson County Bearcats Friday night.

The Mercer County Titans (2-10 faced off against the neighboring Anderson County Bearcats (0-3) on Friday, Sept. 3. The Titans scored a 58-12 landslide victory.

Mercer kicked off, but recovered the ball after it bounced off the Anderson return man. Taking over at their own 32 yard line, the Titans found the endzone in two plays with a 23 yard completion from senior quarterback Trosper Buchanan to sophomore Thaddeus May. Jonah Lewis made it 7-0 with the extra point. Lewis was six out of seven on the night and 10 out of 11 for the season.

Anderson started their next possession from their 20 yard line on a Beau Brown touchback and were forced to punt six plays later. When the Titans took over, they took off with a reverse to Jalen Lukitsch for a 37 yard gain. Brayden Dunn punched the ball in from the one yard line and after the extra point, Mercer was up 14-0.

The Titans were just as dominant on the other side of the ball. Defensive lineman Tristen Tyler, Dakota Browning and Zaryn Jackson forced a three and out series with three tackles. On fourth down, the ball sailed over the Anderson punter’s head and into the end zone, giving Mercer a safety and putting them up 16-0.

That gave the Titans the ball back. Due to a penalty, the Bearcats were forced to kick from their own 15 yard line and Mercer started the next series only 35 yards away from the end zone. The Titans took advantage, and a 22 yard completion to a wide open Riley Peavler put the the Titans up 23-0 with three quarters of football still to play.